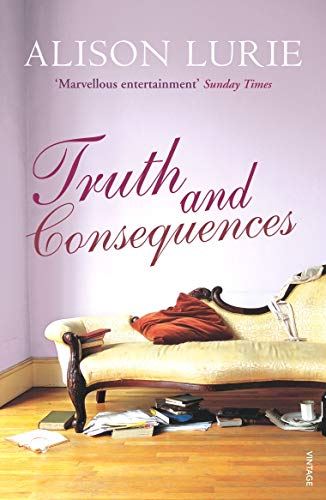 Truth and Consequences
by Alison Lurie

In Stock
£3.99
However, the arrival of a new couple in town - the beautiful and egoistic writer Delia and her cynical husband Henry - heralds a period of dramatic change for the Mackenzies.
Very Good
Only 2 left

Truth and Consequences by Alison Lurie

Alan Mackenzie's bad back is ruining both his and his wife Jane's lives. After years of happy marriage, these two attractive and intelligent people have stopped making love and are starting to resent each other. However, the arrival of a new couple in town - the beautiful and egoistic writer Delia and her cynical husband Henry - heralds a period of dramatic change for the Mackenzies. Truth and Consequences is a comedy about love and its disguises, and identity and change - about the small disasters and sudden attractions that can turn even the most stable relationship upside down.

"Mordant and entertaining, and wonderfully expansive about a time, a place, and the corrosive effect of selfishness" -- Penelope Lively * Spectator *
"Hours of bitter-sweet, highly intelligent fun" * Scotsman *
"An enjoyably spiky minuet of human selfishness" * The Times *
"Sly and funny. A deeply pleasurable page-turner" * Observer *
"It is Lurie, not Updike whom people will one day read to discover what our life and times were really like. Dazzling intelligent, witty, perceptive and engaging, she is not to be missed" * New Statesman *

Alison Lurie is the author of ten novels, including Foreign Affairs (Pulitzer Prize, 1985), The Truth About Lorin Jones (Prix Femina Etranger, 1989), and The Last Resort. Ms Lurie has also published Women and Ghosts, a collection of supernatural stories; Familiar Spirits, a memoir of the poet James Merrill; and The Language of Clothes, a study of the psychology of fashion. She has written two collections of essays on children's literature, Tell the Grown-ups and Boys and Girls Forever, and three books of traditional folktales for children. Three of Alison Lurie's novels - Foreign Affairs, The War Between the Tates and Imaginary Friends - have been adapted for television. She has received Guggenheim and Rockerfeller Foundation grants, and the Amercian Academy of Arts and Letters Award in Fiction. Alison Lurie was until recently the Frederic J. Whiton Porfessor of American Literature at Cornell University. She is now retired and she spends part of the summer in London and most of the winter in Key West, Florida.

GOR000939538
Truth and Consequences by Alison Lurie
Alison Lurie
Used - Very Good
Paperback
Vintage Publishing
2006-06-01
240
0099485060
9780099485063
N/A
Book picture is for illustrative purposes only, actual binding, cover or edition may vary.
This is a used book - there is no escaping the fact it has been read by someone else and it will show signs of wear and previous use. Overall we expect it to be in very good condition, but if you are not entirely satisfied please get in touch with us.