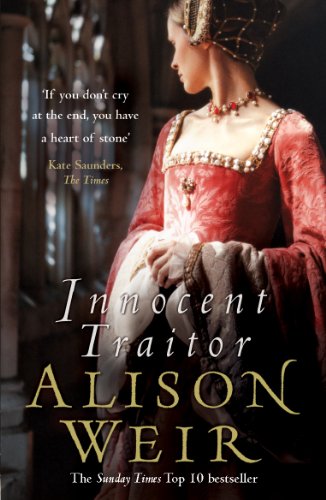 In Stock
£4.49
Alison Weir, our pre-eminent popular historian, has now fulfilled a life's ambition to write historical fiction. Child of a scheming father and a ruthless mother, for whom she was merely a pawn in a dynastic power game with the highest stakes, she lived a life in thrall to political machinations and lethal religious fervour.
Very Good Good
14 in stock

Alison Weir, our pre-eminent popular historian, has now fulfilled a life's ambition to write historical fiction. She has chosen as her subject the bravest, most sympathetic and wronged heroine of Tudor England, Lady Jane Grey. Lady Jane Grey was born into times of extreme danger. Child of a scheming father and a ruthless mother, for whom she was merely a pawn in a dynastic power game with the highest stakes, she lived a life in thrall to political machinations and lethal religious fervour. Jane's astonishing and essentially tragic story was played out during one of the most momentous periods of English history. As a great-niece of Henry VIII, and the cousin of Edward VI, Mary I and Elizabeth I, she grew up to realize that she could never throw off the chains of her destiny. Her honesty, intelligence and strength of character carry the reader through all the vicious twists of Tudor power politics, to her nine-day reign and its unbearably poignant conclusion.

"Alison Weir's hugely popular history books are as gripping as novels, and now she has stepped effortlessly over the boundary... Weir's knowledge of the background is immaculate, and she revels in the freedom of fiction without sacrificing historical fact. Lady Jane is brave and intelligent, and if you don't cry at the end you have a heart of stone." -- Kate Saunders * The Times *
"Alison Weir is one of our greatest popular historians. In her first work of fiction, she sets out to trace the brief life of one of history's most tragic heroines... Weir manages her heroine's voice brilliantly, respecting the past's distance while conjuring a dignified and fiercely modern spirit. " * Daily Mail *
"This is an impressive debut. Weir shows skill at plotting and maintaining tension, and she is clearly going to be a player in the overcrowded historical fiction game. We can look forward to seeing what subject she'll tackle next." -- Lesley McDowell * Independent on Sunday *
"The story is so compelling and horrible that even a reader well acquainted with it will be gripped...This is a novel that will grip readers and give great pleasure." -- Allan Massie * Scotsman *

Alison Weir is one of Britain's top-selling historians. She is the author of numerous works of history and historical fiction, specialising in the medieval and Tudor periods. Her bestselling history books include The Six Wives of Henry VIII, Eleanor of Aquitaine, Elizabeth of York and, most recently, The Lost Tudor Princess. Her novels include Innocent Traitor, Katherine of Aragon: The True Queen and Anne Boleyn: A King's Obsession. She is an Honorary Life Patron of Historic Royal Palaces. She is married with two adult children and lives and works in Surrey.

GOR001000606
Innocent Traitor by Alison Weir
Alison Weir
Used - Very Good
Paperback
Cornerstone
2007-05-30
432
0099493799
9780099493792
N/A
Book picture is for illustrative purposes only, actual binding, cover or edition may vary.
This is a used book - there is no escaping the fact it has been read by someone else and it will show signs of wear and previous use. Overall we expect it to be in very good condition, but if you are not entirely satisfied please get in touch with us.