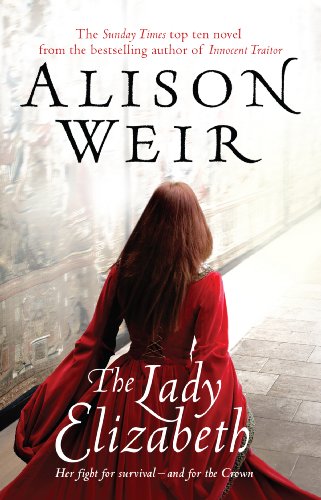 The Lady Elizabeth
by Alison Weir

In Stock
£4.49
She is destined to ascend the throne, and deferred to as the King's heiress, but that all changes when her mother Anne Boleyn - Henry`s great passion and folly - is executed for treason.
Very Good Good
6 in stock

The Lady Elizabeth by Alison Weir

England, 1536. Home to the greatest, most glittering court in English history. But beneath the dazzling facade lies treachery . . . Elizabeth Tudor is daughter to Henry VIII, the most powerful king England has ever known. She is destined to ascend the throne, and deferred to as the King's heiress, but that all changes when her mother Anne Boleyn - Henry`s great passion and folly - is executed for treason. Elizabeth 's life alters in a heartbeat. A pawn in the savage game of Tudor power politics, she is disinherited, declared a bastard, and left with only her quick wits to rely on for her very existence. But Elizabeth is determined to survive, to foil those who want to destroy her, or who are determined to use her as a puppet for their own lethal ambition, and to reclaim her birthright . . .

"This novel takes us into a very plausible and frightening 16th-century world... Can Elizabeth survive? Well, you know the answer but this Tudor thriller is so exciting that you find yourself amazed that she did." * Daily Express *
"This enjoyable novel by a popular historian tells the story of Elizabeth I before she became Queen... She emerges as a thoughtful, wise, precocious and likeable survivor. The novel is meticulously researched and convincingly captures the intimate details of the future Monarch's daily life." * Mail on Sunday *
"Weir employs contemporary gossip to intriguing effect. With a style that casts even Philippa Gregory's stately gavottes in a dashing new light, Weir convinces with her scholarly grasp" * Independent *
"Weir's Elizabeth is nuanced and enchanting, and the author lends a refreshing perspective to well-known characters and events... [An] entertaining look into the rarely explored life of one of England's most fascinating characters" * Publishers Weekly *
"[A] compelling, even irresistible read... Weir offers an exceptionally perceptive as well as imaginative interpretation of the most significant monarch in English history" * Booklist (starred review) *

Alison Weir is one of Britain's top-selling historians. She is the author of numerous works of history and historical fiction, specialising in the medieval and Tudor periods. Her bestselling history books include The Six Wives of Henry VIII, Eleanor of Aquitaine, Elizabeth of York and, most recently, The Lost Tudor Princess. Her novels include Innocent Traitor, Katherine of Aragon: The True Queen and Anne Boleyn: A King's Obsession. She is an Honorary Life Patron of Historic Royal Palaces. She is married with two adult children and lives and works in Surrey.

GOR001089057
The Lady Elizabeth by Alison Weir
Alison Weir
Used - Very Good
Paperback
Cornerstone
2009-06-04
496
0099493829
9780099493822
N/A
Book picture is for illustrative purposes only, actual binding, cover or edition may vary.
This is a used book - there is no escaping the fact it has been read by someone else and it will show signs of wear and previous use. Overall we expect it to be in very good condition, but if you are not entirely satisfied please get in touch with us.