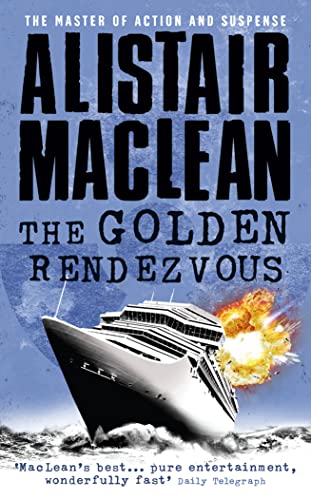 The Golden Rendezvous
by Alistair MacLean

A timeless classic of modern-day piracy from the acclaimed master of action and suspense.

The Golden Rendezvous by Alistair MacLean

A timeless classic of modern-day piracy from the acclaimed master of action and suspense.

Aboard the SS Campari, all is not well.

For Johnny Carter, the Chief Officer, the voyage has already begun badly; but it's only when the Campari sails that evening, after a succession of delays that he realises something is seriously wrong.

A member of the crew is suddenly missing and the stern-to-stern search only serves to increase tension. Then violence erupts and suddenly the whole ship is in danger. Is the Campari a victim of modern day piracy? And what of the strange cargo hidden below the decks?

`MacLean is a master of this kind of action novel.
Evening Standard

`In my opinion, his best ever. The pace is dazzling, the sea atmosphere superb'
Sunday Express

'Mr MacLean's grip on his story and characters is superb... His climax is murderous on the nerves' Sunday Telegraph

Alistair MacLean, the son of a Scots minister, was brought up in the Scottish Highlands. In 1941 he joined the Royal Navy. After the war he read English at Glasgow University and became a schoolmaster. The two and a half years he spent aboard a wartime cruiser were to give him the background for HMS Ulysses, his remarkably successful first novel, published in 1955. He is now recognized as one of the outstanding popular writers of the 20th century, the author of 29 worldwide bestsellers, many of which have been filmed. He died in 1987.

GOR000531753
The Golden Rendezvous by Alistair MacLean
Alistair MacLean
Used - Very Good
Paperback
HarperCollins Publishers
1986-07-02
384
0006162592
9780006162599
N/A
Book picture is for illustrative purposes only, actual binding, cover or edition may vary.
This is a used book - there is no escaping the fact it has been read by someone else and it will show signs of wear and previous use. Overall we expect it to be in very good condition, but if you are not entirely satisfied please get in touch with us.