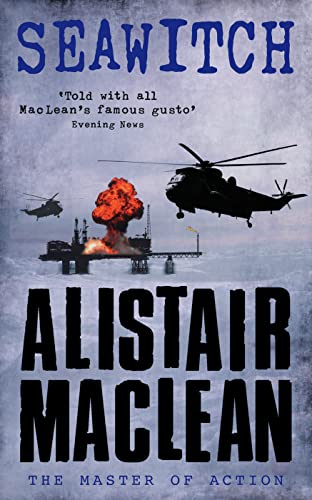 The tale of murder and revenge set on a remote oil rig, from the acclaimed master of action and suspense.

The tale of murder and revenge set on a remote oil rig, from the acclaimed master of action and suspense.

The massive oil-rig is the hub of a great empire, the pride of its billionaire owner.

Lord Worth, predatory and ruthless, has clawed his way to great wealth. Now, he cares for only two things - Seawitch and his two high-spirited daughters. One man knows this:

John Cronkite, trouble-shooter for the world's top oilmen and Worth's ex-victim, is spoiling for revenge.

GOR000331775
Seawitch by Alistair MacLean
Alistair MacLean
Used - Well Read
Paperback
HarperCollins Publishers
1986-07-02
288
0006164749
9780006164746
N/A
Book picture is for illustrative purposes only, actual binding, cover or edition may vary.
This is a used book. We do our best to provide good quality books for you to read, but there is no escaping the fact that it has been owned and read by someone else previously. Therefore it will show signs of wear and may be an ex library book.