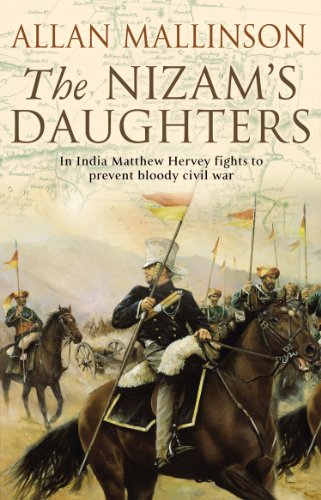 The Nizam's Daughters
by Allan Mallinson

In Stock
£2.99
India, 1816Fresh from the field of Waterloo, Matthew Hervey is dispatched on a mission of the utmost secrecy. For the princely state of Chintal is threatened both by intrigue from within and military might from without, and Hervey - sabre in hand - finds he is once more destined for the field of battle...
Very Good
Only 4 left

India, 1816 Fresh from the field of Waterloo, Matthew Hervey is dispatched on a mission of the utmost secrecy. Leaving behind his fiancee, Lady Henrietta Lindsey, he must journey across tempestuous seas to India, an alien, exotic and beguiling land that will test his mettle to the very limit. For the princely state of Chintal is threatened both by intrigue from within and military might from without, and Hervey - sabre in hand - finds he is once more destined for the field of battle... 'Captain Hervey of the 6th Light Dragoons and ADC to the Duke of Wellington is back in the saddle ...He is as fascinating on horseback as Jack Aubrey is on the quarterdeck.'The Times

"A marvellous read, paced like a well-balanced symphony ... This is more than a ripping yarn...I look forward enormously to hearing more of Hervey's exploits; he is as fascinating on horseback as Jack Aubrey is on the quarterdeck." * The Times *
"'This is an engaging work...The attention to detail is admirable'" * Daily Express *
"Allan Mallinson's grasp of the technical side of his subject is effortless and impressive...The portrayal of the men of all ranks is excellent ...This promises to be an extremely enjoyable series" * Spectator *
"Treads a middle course between the subtleties of O'Brian and the simplicities of Cornwell...An exciting, fast-moving story, full of bloody hacking with sabre and tulwar." * Evening Standard *
"'O'Brian's equal in accurate knowledge of the equipment, methods, weapons and conditions of serve of the fighting men of whom he writes...An imaginative feat of high order, owning as much to thorough scholarship as it does to compassion and sensibility... Brilliantly conveyed'" * Country Life *

GOR001146209
The Nizam's Daughters: (Matthew Hervey 2) by Allan Mallinson
Allan Mallinson
Matthew Hervey
Used - Very Good
Paperback
Transworld Publishers Ltd
2001-03-01
544
0553507141
9780553507140
N/A
Book picture is for illustrative purposes only, actual binding, cover or edition may vary.
This is a used book - there is no escaping the fact it has been read by someone else and it will show signs of wear and previous use. Overall we expect it to be in very good condition, but if you are not entirely satisfied please get in touch with us.