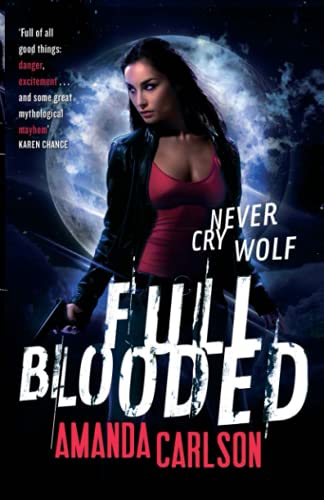 In Stock
£2.99
From a debut author comes the start of a fast-paced and irresistibly sexy urban fantasy series, perfect for fans of Kelley Armstrong and Rachel Vincent
Very Good
5 in stock

After living under the radar for the last twenty-six years, Jessica is thrust unexpectedly into her first change, a full ten years late. She wakes up and finds she's in the middle of a storm. Now that she's become the only female full-blooded werewolf in town, the supernatural world is already clamouring to take a bite out of her. Now her new Pack must rise up and protect her.

But not everyone is on board. There are certain superstitious werewolves who think Jessica means an end to their race - and they're not about to go down without a fight.

Amanda Carlson's Full Blooded is full of all good things: danger, excitement, an original, LIKEABLE heroine and some great mythological mayhem. Bring on book 2! -- Karen Chance, New York Times Bestselling Author
Family dynamics, werewolf politics and dire prophecy combine to great effect in this fast-paced adventure * Romantic Times *
Amanda Carlson's debut novel is a fast paced tale with a cliffhanger ending that left me panting for more. Full Blooded left me on the edge of my seat from cover to cover -- Faith Hunter, New York Times Bestselling Author
A wild, wolfy ride that will have you howling for more! -- Kristen Painter, author of BLOOD RIGHTS
Sleek, edgy and action-packed urban fantasy, and I breezed through it in a matter of hours * Nocturnal Book Reviews *
An amazing start to a new urban fantasy series . . . Full Blooded has everything you could want from an urban fantasy. Great characters, plenty of action with some fantastic fight scenes, a little bit of mystery and a dash of romance. Basically this is a great read all round * BOOK CHICK CITY *

Amanda Carlson started writing stories about teenage girls and their social missteps when she was in high school - and still has the handwritten spiral notebooks to prove it. She worked as a sign language interpreter, and often dreams of Hawaii. She lives in Minneapolis with her family.

GOR004840676
Full Blooded: Book 1 in the Jessica McClain series by Amanda Carlson
Amanda Carlson
Jessica McCain
Used - Very Good
Paperback
Little, Brown Book Group
2012-09-06
368
0356501264
9780356501260
N/A
Book picture is for illustrative purposes only, actual binding, cover or edition may vary.
This is a used book - there is no escaping the fact it has been read by someone else and it will show signs of wear and previous use. Overall we expect it to be in very good condition, but if you are not entirely satisfied please get in touch with us.