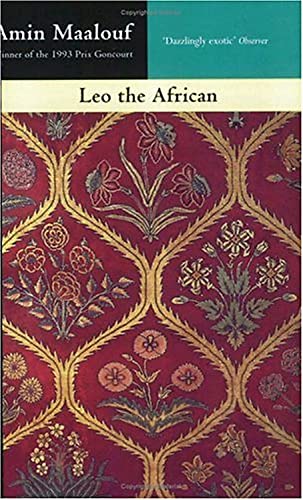 Leo The African
by Amin Maalouf

In Stock
£5.99
'Leo the African' is based on the true life-story of Hasan al-Wazzan, the 16th-century traveller and writer who came to be known as Leo Africanus, or Leo the African. This is a story of pirates, slave-girls and princesses, in a world in a state of religious flux.
Very Good Good
8 in stock

Leo The African by Amin Maalouf

From his chlidhood in Fez, having fled the Christian Inquisition, through his many journeys to the East as an itinerant merhcant, Hasans story is a quixotic catalogue of pirates, slave girls and princesses, encompassing the complexities of a world in a state of religious flux. Hasan too is touched by the instability of the era, performing his hadj to Mecca, then converting to Christianity, only to relapse back to the Muslim faith later in life.

In re-creating his extraordinary experiences, Amin Maalouf sketches an irrisistible portrait of the Mediterranea world as it was nearly five centuries ago - the fall of Granada, the Ottoman conquest of Egypt, Renaissance Rome under the Medicis: all contribute to a background of spectacular colour, matched only by the picaresque adventures of Hasan's life.

The most entertaining education we could wish for...Leo the African is a celebration of the romance and power of the Arab world, its ideals and achievements - Daily Telegraph * Maalouf's fiction offers both a model for the future and a caution, a way towards cultural understanding and an appaling measure of the consequences of failure. He is a voice which Europe cannot afford to ignore - Guardian *

Amin Maalouf is a Lebanese journalist and writer. He was formerly director of the weekly international edition of the leading Meirut daily an-Nahar, and editor in chief of Jeune Afrique. He now lives in Paris with his wife and three children.

GOR001208391
Leo The African by Amin Maalouf
Amin Maalouf
Used - Very Good
Paperback
Little, Brown Book Group
1994-09-22
368
0349106002
9780349106007
N/A
Book picture is for illustrative purposes only, actual binding, cover or edition may vary.
This is a used book - there is no escaping the fact it has been read by someone else and it will show signs of wear and previous use. Overall we expect it to be in very good condition, but if you are not entirely satisfied please get in touch with us.