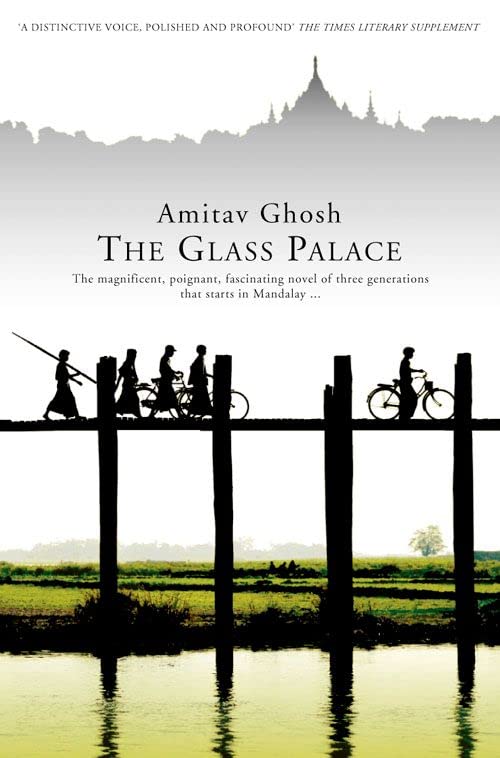 The Glass Palace
by Amitav Ghosh

The acclaimed author of `The Calcutta Chromosome' and `The Shadow Lines' has burst out on to the big stage with a major saga on that hidden country, Burma.

The Glass Palace by Amitav Ghosh

The acclaimed author of `The Calcutta Chromosome' and `The Shadow Lines' has burst out on to the big stage with a major saga on that hidden country, Burma.

Rajkumar is only another boy, helping on a market stall in the dusty square outside the royal palace, when the British force the Burmese king, queen and all the court into exile. He is rescued by the far-seeing Chinese merchant, and with him builds up a logging business in upper Burma. But haunted by his vision of the royal family, he journeys to the obscure town in India where they have been exiled.

The picture of the tension between the Burmese, the Indian and the British, is excellent. Among the great range of characters are one of the court ladies, Miss Dolly, whom he marries; and the redoubtable Jonakin, part of the British-educated Indian colony, who with her husband has been put in charge of the Burmese exiled court.

The story follows the fortunes - rubber estates in Malaya, businesses in Singapore, estates in Burma - which Rajkumar, with his Chinese, British and Burmese relations, friends and associates, builds up - from 1870 through World War II to the scattering of the extended family to New York and Thailand, London and Hong Kong in the post-war years.

`Ambitious, multigenerational, "The Glass Palace" is akin to a 19th-century Russian novel...a rich, layered epic that probes the meaning of identity and homeland.' LA Times

`An absorbing story of a world in transition, brought to life through characters who love and suffer with equal intensity.' J.M. Coetzee

`A "Doctor Zhivago" for the Far East.' Independent

The author was born in India of Burmese parents. Educated in India and Britain, he now lives in New York.

GOR010491698
The Glass Palace by Amitav Ghosh
Amitav Ghosh
Used - Like New
Paperback
HarperCollins Publishers
2001-06-18
560
000651409X
9780006514091
Winner of The Commonwealth Writer's Prize Best Book Eurasia 2001
Book picture is for illustrative purposes only, actual binding, cover or edition may vary.
The book has been read, but looks new. The book cover has no visible wear, and the dust jacket is included if applicable. No missing or damaged pages, no tears, possible very minimal creasing, no underlining or highlighting of text, and no writing in the margins.