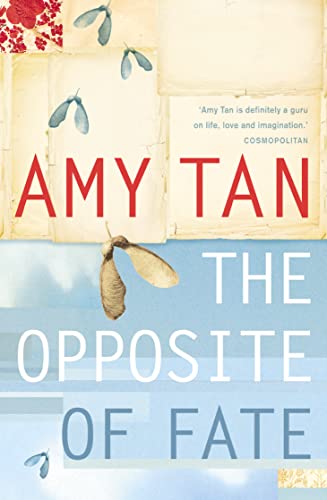 The Opposite of Fate
by Amy Tan

An unbearably moving, intensely passionate, deeply personal account of life as seen through the eyes of one of America's best-loved novelists.

The Opposite of Fate Summary

The Opposite of Fate by Amy Tan

An unbearably moving, intensely passionate, deeply personal account of life as seen through the eyes of one of America's best-loved novelists.

`When I began writing this history, I let go of my doubts. I trusted the ghosts of my imagination. They showed me the hundred secret senses. And what I wrote is what I discovered about the endurance of love.'

So writes Amy Tan at the beginning of this remarkably candid insight into her life. Tan takes us on a journey from her childhood, as a sensitive but intelligent young Chinese-American, ashamed of her parents' Chinese ways, to the present day and her position as one of the world's best-loved novelists.

She describes the daily difficulties of being at once American and Chinese and yet feeling at times like she was truly neither. Most significantly, and heartbreakingly, she tells the history of her family: the grandmother who committed suicide as the only means of defiance open to her against a husband who ignored her wishes; her remarkable mother, whose first husband had her jailed when she tried to leave him; and the shocking deaths of both her father and husband when Amy was just 14.

How this weight of history has brought itself to bear on the adult Amy looms large in her own story. Ghosts, chance and fate have played a part in her life, and `The Opposite of Fate' is an insight into those ancestors, the women who `never let me forget why these stories need to be told'.

The Opposite of Fate Reviews

`Amy Tan is definitely a guru on life, love and imagination.' Cosmopolitan

`Could there be a better model for writers today than Amy Tan? She tells great stories with powerful themes: love, belonging, exile, death, compassion. She moves easily between pathos, comedy and joy.' Scotland on Sunday

amy tan is the author of four critically acclaimed, internationally bestselling novels. Her first novel, The Joy Luck Club, was nominated for the National Book Award and the National Book Critics Circle Award and was a recipient of the Commonwealth Gold Award. The Joy Luck Club was also adapted into a feature film in 1994. Her subsequent novels are The Kitchen God's Wife, The Hundred Secret Senses, and The Bonesetter's Daughter. She lives in San Francisco and New York.

GOR000733780
The Opposite of Fate by Amy Tan
Amy Tan
Used - Very Good
Paperback
HarperCollins Publishers
2004-07-05
432
0007170408
9780007170401
N/A
Book picture is for illustrative purposes only, actual binding, cover or edition may vary.
This is a used book - there is no escaping the fact it has been read by someone else and it will show signs of wear and previous use. Overall we expect it to be in very good condition, but if you are not entirely satisfied please get in touch with us.