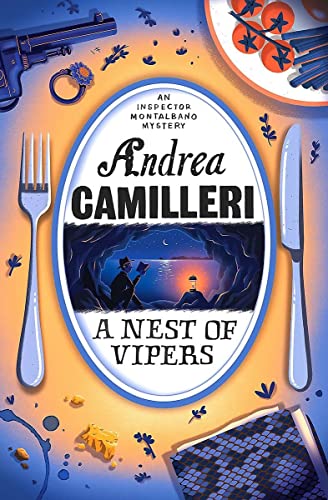 A Nest of Vipers
by Andrea Camilleri

Used Price
£6.19
New RRP £9.99
Free Shipping in the UK
Inspector Montalbano is back in Vigata solving the twenty-first intriguing mystery in the series . . .
Reviews:
Trustpilot
Like New Very Good Good

A Nest of Vipers Summary

A Nest of Vipers by Andrea Camilleri

A Nest of Vipers is the twenty-first novel in Andrea Camilleri's irresistible Inspector Montalbano series.

Quite a family, you had to admit! A nest of vipers might be a better description . . .

On what should be a quiet Sunday morning, Inspector Montalbano is called to a murder scene on the Sicilian coast. A man has discovered his father dead in his Vigatan beach house: his body slumped on the dining room floor, his morning coffee spilt across the table, and a single gunshot wound at the base of his skull.

First appearances point to the son having the most to gain from his father's untimely death, a notion his sister can't help but reinforce. But when Montalbano delves deeper into the case, and learns of the dishonourable life the victim led, it soon becomes clear half of Vigata has a motive for his murder and this won't be as simple as the Inspector had once hoped . . .

A Nest of Vipers is followed by the twenty-second gripping mystery, The Pyramid of Mud.

Customer Reviews - A Nest of Vipers

A Nest of Vipers Reviews

Montalbano's colleagues, chance encounters, Sicilian mores, even the contents of his fridge are described with the wit and gusto that make this narrator the best company in crime fiction today * Guardian *
Among the most exquisitely crafted pieces of crime writing available today . . . Simply superb * Sunday Times *
One of fiction's greatest detectives and Camilleri is one of Europe's greatest crime writers * Daily Mail *

GOR009322746
A Nest of Vipers by Andrea Camilleri
Andrea Camilleri
Inspector Montalbano mysteries
Used - Like New
Paperback
Pan Macmillan
2018-06-12
288
1447266021
9781447266020
N/A
Book picture is for illustrative purposes only, actual binding, cover or edition may vary.
The book has been read, but looks new. The book cover has no visible wear, and the dust jacket is included if applicable. No missing or damaged pages, no tears, possible very minimal creasing, no underlining or highlighting of text, and no writing in the margins.