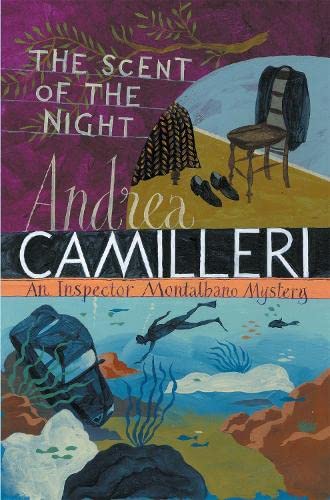 The Scent of the Night
by Andrea Camilleri

The Scent of the Night Summary

The Scent of the Night by Andrea Camilleri

The Scent of the Night is the sixth comic detective novel in the Inspector Montalbano series by Andrea Camilleri.

Montalbano learned how hard it was to put on a wetsuit while in a dinghy speeding over a sea that wasn't exactly calm. Mimi, at the helm, looked tense and worried.

"Getting seasick?" the inspector asked him at one point.

"Because every now and then I realize what a stupid shit I am to go along with some of your brilliant ideas."

When an angry octogenarian holds a terrified and lovelorn secretary at gunpoint, Inspector Montalbano is reluctantly drawn into the case. The secretary's boss, a financial advisor, has vanished along with several billion lire entrusted to him by the good citizens of Vigata. Also missing is the advisor's young colleague, whose uncle just happens to be building a house on the site of Inspector Montalbano's very favourite olive tree . . .

Ably abetted by his loyal and eccentric team, Montalbano, the food-loving, commitment-phobic inspector, returns for another delicious investigation served up in vintage Camilleri style.

The Scent of the Night is followed by the seventh book in the series, Rounding the Mark.

GOR000956629
The Scent of the Night by Andrea Camilleri
Andrea Camilleri
Inspector Montalbano mysteries
Used - Very Good
Paperback
Pan Macmillan
2007-06-15
240
033044218X
9780330442183
N/A
Book picture is for illustrative purposes only, actual binding, cover or edition may vary.
This is a used book - there is no escaping the fact it has been read by someone else and it will show signs of wear and previous use. Overall we expect it to be in very good condition, but if you are not entirely satisfied please get in touch with us.