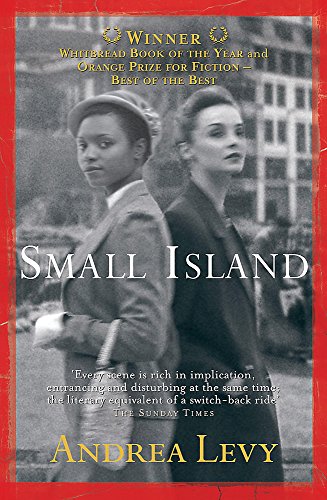 Small Island by bestselling author Andrea Levy won the Orange Prize for Fiction, as well as the Commonwealth Writers' Prize and the Whitbread. It is possibly the definitive fictional account of the experiences of the Empire Windrush generation. Now a major BBC drama starring Benedict Cumberbatch and Naomie Harris, its enduring appeal will captivate fans of Maya Angelou and Zadie Smith.

It is 1948, and England is recovering from a war. But at 21 Nevern Street, London, the conflict has only just begun. Queenie Bligh's neighbours do not approve when she agrees to take in Jamaican lodgers, but Queenie doesn't know when her husband will return, or if he will come back at all. What else can she do?

Gilbert Joseph was one of the several thousand Jamaican men who joined the RAF to fight against Hitler. Returning to England as a civilian he finds himself treated very differently. It's desperation that makes him remember a wartime friendship with Queenie and knock at her door.

Gilbert's wife Hortense, too, had longed to leave Jamaica and start a better life in England. But when she joins him she is shocked to find London shabby, decrepit, and far from the golden city of her dreams. Even Gilbert is not the man she thought he was...

Andrea Levy was born in England to Jamaican parents who came to Britain in 1948. After attending writing workshops when she was in her mid-thirties, Levy began to write the novels that she, as a young woman, had always wanted to read - entertaining novels that reflect the experiences of black Britons, which look at Britain and its changing population and at the intimacies that bind British history with that of the Caribbean.

She has written six books, including SMALL ISLAND, which was the unique winner of both the Orange Prize for Fiction and the Whitbread book of the Year, in addition to the Commonwealth Writer's Prize and the Orange Prize 'Best of the Best'. Her most recent novel, THE LONG SONG, won the Walter Scott Prize and was shortlisted for the Man Booker Prize.

GOR000369319
9780755307500
075530750X
Small Island: Winner of the 'best of the best' Orange Prize by Andrea Levy
Andrea Levy
Used - Very Good
Paperback
Headline Publishing Group
2004-09-13
560
Winner of Orange Prize for Fiction 2004 Winner of Whitbread Book Awards: Book of the Year 2004 Runner-up for Reading Group Book of the Year 2007 Short-listed for Orange Youth Panel Prize 2010
Book picture is for illustrative purposes only, actual binding, cover or edition may vary.
This is a used book - there is no escaping the fact it has been read by someone else and it will show signs of wear and previous use. Overall we expect it to be in very good condition, but if you are not entirely satisfied please get in touch with us
Trustpilot