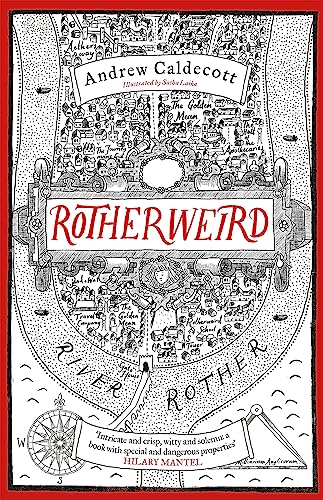 Used Price
£2.99
New RRP £8.99
Free Shipping in the UK
A secret so dark is must never be rediscovered. A town where nobody can study its history. Now an Outsider has come - and his presence could upset everything . . . Welcome to Rotherweird.
Very Good Good Well Read

'Enthralling' M.R. Carey, bestselling author of The Girl With All the Gifts

1558: Twelve children, gifted far beyond their years, are banished by their Tudor queen to the town of Rotherweird. Some say they are the golden generation; some say the devil's spawn. But everyone knows they are something to be revered - and feared.

Four and a half centuries on, cast adrift from the rest of England by Elizabeth I and still bound by its ancient laws, Rotherweird's independence is subject to one disturbing condition: nobody, but nobody, studies the town or its history.

Then an Outsider arrives, a man of unparallelled wealth and power, enough to buy the whole of Rotherweird - deeply buried secrets and all . . .

A history-tragic-comedy all rolled into one, Rotherweird is intricate and crisp, witty and solemn: a book not unlike other books, but with special and dangerous properties. Line by line, silent and adroit, it opens a series of trap-doors in the reader's imagination * Hilary Mantel, two-time Man Booker prize winner *
An imaginative tour de force * The Times *
Baroque, Byzantine and beautiful - not to mention bold. An enthralling puzzle picture of a book * M R Carey, author of the bestselling The Girl With All The Gifts *
Compelling . . . the love child of Gormenghast and Hogwarts * Guardian *
Sublime . . . Call me greedy, but I'm already itching to return to Caldecott's universe * The Irish Times *
One of this year's most anticipated debut novels * SFX *
This novel is a remarkable achievement. It's also extremely funny, in a typically British sort of way . . . a delightful Harry Potter for grown ups * Sunday Independent *
Truly, sinisterly magical. 10/10 * Starburst *
A great introduction to its strange and mesmerising world, and a feat of imagination, packed with ideas and extraordinary people. It's well worth the visit * SciFiNow *
This is a twisty, hilarious, magical story crammed full of intricate characters and nefarious plots * The Little Squid *
I LOVED this book. It just did something to me. I was utterly immersed from page one . . . This is a novel of magnificence and detail, of science and nature * Fantastical Library *
Assured and ambitious . . . deeply impressive debut * Nick Curtis, Evening Standard on Higher than Babel *
Hugely entertaining . . . this novel is a remarkable achievement. It's also extremely funny, in a typically British sort of way * Independent.ie *
Vivid and absorbing and grapples with big ideas without being dry, difficult or patronising * Sarah Hemming, Financial Times on Higher than Babel *
What an enjoyable read! So vividly written, I could visualise every winding street and twisting chimney of Rotherweird . . . If you like Ben Aaronovitch, Neil Gaiman or Susanna Clarke, this book is for you! * Book Geek Girl *
If J. K. Rowling had given Jasper Fforde permission to document a decade of derring-do in Diagon Alley, the result would read rather like Rotherweird * Tor.com *
A quirky portal fantasy peppered with singular names . . . Top marks for inventiveness * Speculative Herald *
This is an immensely enjoyable, Gothic(ish) / steampunk/ Gormanghast-esque romp with Dickensian overtones. Rotherweird itself is a great imaginative creation . . . A fun, often funny, exciting and highly readable story. Get it now * Blue Balloon *
Highly recommended, I think this novel will eventually be viewed as a modern classic * The Eloquent Page *
One of the most appealing and fascinating books I've read in some time now. There is darkness and humour here together with invention and originality. For me there are echoes of the work of both Mervyn Peake and Neil Gaiman here * Books and More Books *
This is quite possibly the best fantasy novel I have read this year * Silvia Kay on YouTube *
The writing is a true pleasure . . . an airy, yet incisive quality; a purposeful dreaminess; images that stick with me, yet prose that does not labor to describe * Strange Horizons *
A highly unusual book, a kind of portal fantasy/historical fantasy/contemporary urban fantasy blend. It reminds me most of Robert Holdstock or Charles de Lint, though less ominous in tone than either * The Review Curmudgeon *
Unusual, mannered, quirky * Library Thing *
A fun blend of absurdist humour, creepy peril and fecund magic to be found here * Press Reader *
History, fantasy, tragedy and comedy collide in new and unusual ways, to create a novel that is full of intrigue and mystery * The Book Muse *
Rotherweird definitely delivered. The flippant way to describe it would be as a Midsomer Murders episode as told by Jeff VanderMeer with a touch of Agatha Christie. That doesn't do it justice though because joking aside it's a very good book * Stefen's Books *
I loved the blend of past, present and other worlds. I loved the characters, the intricate plotting and the playfulness with words, English and Latin * Boffins Books *
A mystical tale of suspense and adventure, mixed in with the macabre and Tudor England. Andrew Caldecott's ability to create and shape worlds and the characters in them, draws the reader into an intense narrative of plot and subtext that keeps you guessing. Enchanting and beautifully written * lifehasafunnywayofsneakinguponyou.wordpress.com *
Intricate . . . while the focus might be on the oddball inhabitants, Rotherweird is the true heart and soul of the narrative, a character in its own right * Publishers Weekly *
A strange, twisting tale of dark magic and horrible experimentation . . . Caldecott uses parallel storylines and mysterious, absurd twists and turns to entertain, painting a tale of strange stones, a patch of starless sky, tiles that transport to other worlds, and plants with unexpected properties. The characters are vivid and complex and make up the larger character of a town that is coping with a growing menace * Booklist *
If you like strange, mysterious fantasy, this is the book for you * Lost in a Good Book *
The Rotherweird trilogy is a sprawling absorbing saga that is breathtaking in conceit and accomplishment. Fans of deeply immersive fiction, such as that created by Neal Stephenson, will love losing themselves in this nightmarish vision of a parochial English town * GeekDad *
Rotherweird is a great read when you want to break out of the mold and take a step out of time . . . Returning to the citizens of Rotherweird will surely be as wild a ride as the start * Novel Lives *

Andrew Caldecott (Author)
Andrew Caldecott is a QC specialising in media law; he has represented a wide variety of clients, from the BBC and the Guardian to supermodel Naomi Campbell. An occasional playwright, he turned his hand to fiction when, informed by his love of history, which he studied at New College, Oxford, he was seized by the notion of a city-state hiding a cataclysmic secret. Wyntertide continues the story started in Rotherweird.

Sasha Laika (Illustrator)
Sasha Laika studied figurative art in Moscow, followed by a degree in Graphic Design and Illustration in the UK. A London-based artist for the last 10 years, Sasha creates highly intricate works that draw on imagery from mythology, folklore and religious iconography. Her works are inhabited by mystical creatures that morph between human and animal, and exist in transition somewhere between the worlds of fantasy and reality. She considers Rotherweird the perfect subject for her debut work as a book illustrator.

GOR009104521
Rotherweird: Rotherweird Book I by Andrew Caldecott
Andrew Caldecott
Rotherweird
Used - Very Good
Paperback
Quercus Publishing
2018-05-03
480
1784297631
9781784297633
N/A
Book picture is for illustrative purposes only, actual binding, cover or edition may vary.
The book has been read, but looks new. The book cover has no visible wear, and the dust jacket is included if applicable. No missing or damaged pages, no tears, possible very minimal creasing, no underlining or highlighting of text, and no writing in the margins.