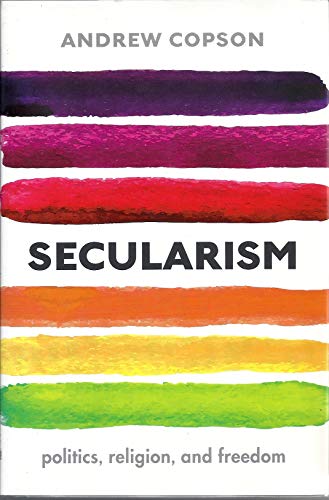 In Stock
£8.99
Secularism, the belief that religion should not be part of the affairs of the state or part of public education, is an increasingly hot topic in global public, political, and religious debates. Andrew Copson tells the story of secularism, discussing secular republics and the challenges they can face from resurgent religious identity politics.
Very Good
Only 1 left

Until the modern period the integration of church (or other religion) and state (or political life) had been taken for granted. The political order was always tied to an official religion in Christian Europe, pre-Christian Europe, and in the Arabic world. But from the eighteenth century onwards, some European states began to set up their political order on a different basis. Not religion, but the rule of law through non-religious values embedded in constitutions became the foundation of some states - a movement we now call secularism. In others, a de facto secularism emerged as political values and civil and criminal law altered their professed foundation from a shared religion to a non-religious basis. Today secularism is an increasingly hot topic in public, political, and religious debate across the globe. It is embodied in the conflict between secular republics - from the US to India - and the challenges they face from resurgent religious identity politics; in the challenges faced by religious states like those of the Arab world from insurgent secularists; and in states like China where calls for freedom of belief are challenging a state imposed non-religious worldview. In this short introduction Andrew Copson tells the story of secularism, taking in momentous episodes in world history, such as the great transition of Europe from religious orthodoxy to pluralism, the global struggle for human rights and democracy, and the origins of modernity. He also considers the role of secularism when engaging with some of the most contentious political and legal issues of our time: 'blasphemy', 'apostasy', religious persecution, religious discrimination, religious schools, and freedom of belief and thought in a divided world.

A must read. It is a worthwhile introduction that will inform and may correct some assumptions and prejudices. * The Rev Maurice Stafford, Methodist Recorder *
Concise and fair-minded ... Secularism helps the reader navigate [the] ... shifting terrain admirably. * Nick Spencer, Times Literary Supplement *
Recommended. * CHOICE *
Copson is even-handed in his analysis ... This is as nuanced a defence of secularism as you'll find * Jonathan Wright, Catholic Herald *
Andrew Copson ... looks for genuine debate in Secularism ... It is natural to review books on atheism and secularism together. The intersection of the two groups is large. But one of the chief benefits of reading Copson is that he enables us to think more deeply about how they diverge. * Maximilian de Gaynesford, The Tablet *
It is to Andrew Copson's credit that his short book refuses to circumvent ... big issues but rather brings them blinking out into the light and enables readers to understand better and think more clearly about them. It is undoubtedly the author's hope-and by and large this reviewer's too-that by the end of the book readers will look more positively on secularism. But that would mark not the end of a debate, but the start of a new one. Secularism yes. But what kind? * Nick Spencer, Theos *
an excellent and sympathetic introduction to secularism * Paradigm Explorer *
[Copson's] new book strikes the rare balance of being both entertaining and informative ... [His] gift, it seems, is the ability to condense decades of the evolution and analysis of the concept of secularism into 140 short pages. * The Pink Humanist *
Today's world is in dire need of the noble tradition of secularism, and I know nobody better qualified than Andrew Copson to expound it. * Richard Dawkins *
This is an exceptionally careful, fair-minded and positive introduction to the many meanings of a word often carelessly used. It will be an enormous help to all who want to understand better the current controversies about religious belief and modern society. * Rowan Williams, former Archbishop of Canterbury *
Secularism is of growing importance all over the world, yet it is also an approach with deep roots reaching far back into our history. Andrew Copson elegantly explores this history as well as secularism's importance today, showing how it evolved and how it is the key to de-escalating so many of the modern world's points of conflict. * Dan Snow *
Andrew Copson is one of the most thoughtful people in the world on secularism. We have never needed a sane, intelligent, persuasive guide to secularism more than now - so I'd say thank God for this excellent book, if that wasn't too obviously ironic. * Johann Hari *
A timely tour de force and indispensable analysis for anyone seeking to get to grips with the roots, philosophy, and current controversies surrounding secularism which are challenging our vexed world. * Professor Francesca Klug, author of Magna Carta For All Humanity: Homing in on Human Rights *
A secular state embraces freedom of religion or belief, the equal treatment of persons regardless of faith, and the separation of religious and state authorities. In this wide-ranging and timely study Andrew Copson describes the virtues of secularism as the guarantor of equal dignity, freedom, and security for all, but also the various platforms from which it is opposed, and its fragile and increasingly beleaguered state across the world. Scrupulously fair, his book brings much-needed clarity into a confused and embittered area of dispute. * Simon Blackburn, author of Ethics: A Very Short Introduction and Plato's Republic: A Biography *
This is a dazzling tour of the history and meanings of Secularism. Copson pulls off that most compelling thing a synthesis of nuance and rigour that is global in its vision, historical in its foundation, but fully contemporary in its relevance. For being so intimately involved in advocacy, the author demonstrates balance and understanding of critical as well as supportive positions, and with its authoritative research base this is immensely useful for student learning in the growing arena of Studies in Nonbelief. * Callum Brown, Professor of Late modern European History, University of Glasgow *

About Andrew Copson (Chief Executive of Humanists UK, President of the International Humanist and Ethical Union)

Andrew Copson is the Chief Executive of Humanists UK (formerly the British Humanist Association), where he was previously Director of Education and Public Affairs; President of the International Humanist and Ethical Union; and a former Director of the European Humanist Federation. In these capacities he is one of the most experienced and prolific advocates of secularism, its study, and its implementation. For over a decade he has carried out a range of national and international practical secularist policy work and spoken internationally on secularism. He has been an associate of the Centre for Law and Religion and the University of Cardiff since 2008 and represented the secularist point of view on public or other bodies such as the Foreign Office's Advisory Panel on Freedom of Religion or Belief and the Woolf Institute's Commission on Religion and Belief in British Public Life. He co-edited The Wiley-Blackwell Handbook on Humanism (Wiley-Blackwell, 2015), with A C Grayling.

AFTERWORD: THE FUTURE OF SECULARISM; REFERENCES AND FURTHER READING; INDEX