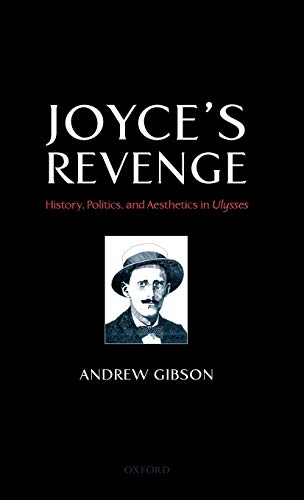 In Stock
£100.99
In this book Andrew Gibson argues that the aesthetic practices that make up Ulysses are responses to the colonial history of Ireland and the colonial politics of Irish culture.
Very Good
Only 1 left

The Ireland of Ulysses was still a part of Britain. This book is the first comprehensive, historical study of Joyce's great novel in the context of Anglo-Irish political and cultural relations in the period 1880-1920. The first forty years of Joyce's life also witnessed the emergence of what historians now call English cultural nationalism. This formation was perceptible in a wide range of different discourses. Ulysses engages with many of them. In doing so, it resists, transforms and works to transcend the effects of British rule in Ireland. The novel was written in the years leading up to Irish independence. It is powered by both a will to freedom and a will to justice. But the two do not always coincide, and Joyce does not place his art in the service of any extant political cause. His struggle for independence has its own distinctive mode. The result is a unique work of liberation - and revenge. This eminently learned but lucidly written book transforms our understanding of Joyce's Ulysses. It does so by placing the novel firmly in the historical context of Anglo-Irish political and cultural relations in the period 1880-1920. Gibson argues that Ulysses is a great work of liberation that also takes a complex form of revenge on the colonizer's culture.

[a] superb study ... It is hard to pay sufficient tribute to Gibson's keenly detailed research and grasp of nuance in his discussion ... Joyce's Revenge deserves to become one of the landmarks in criticism devoted to Ulysses. Several chapters alone are worth the price of the book ... Shaprly and lucidly written, his book is accessible to readers who are not Joyce critics. * James Fairhill, James Joyce Quarterly *
Andrew Gibson has written a book to be mined for decades to come for its unqiue historicaL insight, its extraordinary attention to detail and its powerful theoretical grasp. Joyce's Revenge is the kind of rare book one compulsively recommends to students and friends. * Marian Eide, South Central Review. *
Andrew Gibson's is easily one of the most serious of academic books to have appeared on Joyce in recent years. It is densely researched, full of ideas, and well-embedded in current academic questions, and is sure to become a familiar point of reference in future debates as well as a standard to which subsequent researchers will have to aspire. * Modernism/Modernity *
Gibson's detailed reading of Ulysses against the background of its intertextual archive provides highly revealing and often surprising insights into Joyce's deconstructive representation of the ideological forces at work both in England and Ireland. Joyce's Revenge combines a masterly analytical approach with a supreme grasp of theory, intellectual rigour and a convincing power of persuasion. Among the many books on our shelves produced by the Joyce industry, Gibson's will figure among the first things to read on Ulysses. * Anglia *
The true distinction of Joyce's Revenge lies in its density. This comes in two forms: intellectual and historical. Every page in this book feels hard-won; every argument is sophisticated enough to include a host of variations, or a sequence of counter-arguments. There is almost a hint of Hegel or Adorno in Gibson's thought, the unremitting intensity with which a position is carried through in all its exemplification, then inverted with equal rigour. * Textual Practice *
Joyce's Revenge deserves more than a review: better a colloquium dedicated to following its myriad trails. For all the headlong pursuit of its argument, its chapters are also diversions in themselves, localized and surprising. * Textual Practice *
'Political Joyce' is not new. Its task must now be to age wisely: to root its claims not in theoretical fashion but in deep historical soil. No one has yet undertaken this task with more care and skill than Andrew Gibson. * Textual Practice *
Joyce's Revenge splendidly serves to show us how significant is a scrutiny of the intertwined history of Britain and Ireland for understanding the radical aesthetics of Ulysses. This is a book that will keep Joyce scholars busy, and rightly so, for some time to come. * Irish Studies Review *
Aside from Joyce scholars those working more generally in Irish Studies should also read the book, as it indicates how closely Ulysses is an intervention into the crucial debates around history, culture, and national identity that shaped Ireland from the end of the nineteenth century. * Irish Studies Review *
Almost every page shows evidence of the most scrupulous research into the text, and is almost always persuasive in its arguments. Joyce's Revenge is a genuinely innovative and fascinating account of Ulysses; undoubtedly it will change the contours of Joyce criticism with its profoundly historicised discussion of Joyce's relation to Britain and Ireland. * Irish Studies Review *
The style is admirably clear and direct. * James Joyce Broadsheet *
Andrew Gibson mentions that it took him fifteen years to write Joyce's Revenge. It's remarkable that he was able to produce this challenging, original study with its dense and learned historical detail that quickly. The book was worth waiting for. * James Joyce Broadsheet *
Gibson's nuanced historicist semi-colonial reading is particularly effective in the interpretation of the most challenging parts of the novel, especially the last three episodes. * Clare Hutton, Times Literary Supplement *
This thought-provoking study makes a significant and highly original contribution to scholarship on Ulysses ... a particular strength of this book is the way in which it seeks to interpret the aesthetic of Ulysses as a whole, rather than focusing on a few key features or episodes. * Clare Hutton, Times Literary Supplement *
Joyce's Revenge makes a significant and distinctive contribution to Joyce studies, and it deserves a wide readership. The author is impressively well read in English and Irish cultural history, and the book identifies and explores an aspect of this history about which most Joyceans, perhaps, know less than they might. Among the books on Joyce I've studied recently this is perhaps the most absorbing read, cover to cover, of all of them. * Timothy Martin, James Joyce Literary Supplement *
Andrew Gibson combines a wealth of knowledge and research ... with an admirable sensitivity to the Joycean text. The book has much to do with what postcolonial theory calls 'hybridity' and 'mimicry', but is also densely and precisely historicized ... Joyce's Revenge immerses itself in a broad range of specific cultural discourses on subjects from nationalist politics to medical debates to the politics of street names, the politics of Shakespeare and bardolatry, Protestant-Catholic relations, Jewishness, Irish historiography, women's journals, and astronomy. The result is an important new study that will alter the ways we read Ulysses. * Professor Vincent J. Cheng *
Gibson's book presents a convincing and fruitful method to interpret Ulysses. It also - unlike many students of Joyce - takes Joyce seriously as both a thinker and an artist ... The worth of any theory is not in its cleverness but in its explanatory value. On this basis Gibson's book is a success and a most refreshing one. * The Compulsive Reader *