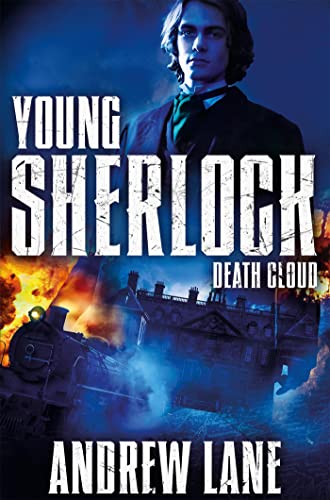 Used Price
£2.99
New RRP £7.99
Free Shipping in the UK
Crack the case with the world's most famous detective! But before he became the great detective, who was young Sherlock Holmes? The first book in a series of mystery adventures featuring a teenage Sherlock and endorsed by the Conan Doyle Estate.
Reviews:
Trustpilot
Very Good Good

Death Cloud is the first in the Young Sherlock Holmes series in which the iconic detective is reimagined as a brilliant, troubled and engaging teenager - creating unputdownable detective adventures that remain true to the spirit of the original books.

The year is 1868, and Sherlock Holmes is fourteen. His life is that of a perfectly ordinary army officer's son: boarding school, good manners, a classical education - the backbone of the British Empire. But all that is about to change. With his father suddenly posted to India, and his mother mysteriously `unwell', Sherlock is sent to stay with his eccentric uncle and aunt in their vast house in Hampshire. So begins a summer that leads Sherlock to uncover his first murder, a kidnap, corruption and a brilliantly sinister villain of exquisitely malign intent . . .

This is a clever book that is full of suspense...His fearless journey is full of action and does not fail to amaze me in a way that only the incredible creation that is Sherlock Holmes can.' 'This book is so good that you simply will not put it down. It is Sherlock Holmes made more easier to understand and to be enjoyed by teenagers. * lovereading4kids.co.uk *
A thrilling mystery, perfect for anyone who likes solving crimes...A great introduction to the worlds most famous detective. * lovereading4kids.co.uk *
Fabulously written, a perfect homage to Conan Doyle and a great introduction to Holmes for younger readers. * NetGalley Librarian *

Andrew Lane is an author, journalist and lifelong Sherlock Holmes fan. He lives in Hampshire with his wife and son. Before Moriarty and before Benedict Cumberbatch, Andrew's passion for the original novels of Sir Arthur Conan Doyle and his determination to create an authentic teenage Sherlock Holmes made him the perfect choice to work with the Conan Doyle Estate to reinvent the world's most famous detective for the Young Sherlock Holmes series.

GOR005921785
Death Cloud by Andrew Lane
Andrew Lane
Young Sherlock Holmes
Used - Very Good
Paperback
Pan Macmillan
2014-03-27
320
1447265580
9781447265580
N/A
Book picture is for illustrative purposes only, actual binding, cover or edition may vary.
This is a used book - there is no escaping the fact it has been read by someone else and it will show signs of wear and previous use. Overall we expect it to be in very good condition, but if you are not entirely satisfied please get in touch with us.