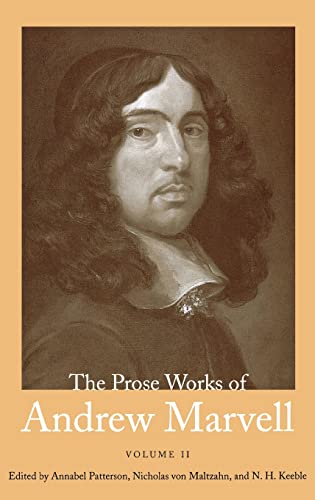 In Stock
£28.99
In his prose works, Marvell established himself as a model of liberal thought for the 18th century and an irresistible new voice in political polemic. This is a modern edition of all Marvell's prose pamphlets, complete with introductions and annotation explaining the historical context.
Very Good
Only 1 left

Andrew Marvell (1621-78) is best known today as the author of a handful of exquisite lyrics and provocative political poems. In his own time, however, Marvell was famous for his brilliant prose interventions in the major issues of the Restoration, religious toleration, and what he called "arbitrary" as distinct from parliamentary government. This is the first modern edition of all Marvell's prose pamphlets, complete with introductions and annotation explaining the historical context. Four major scholars of the Restoration era have collaborated to produce this truly Anglo-American edition.

From the Rehearsal Transpros'd, a serio-comic best-seller which appeared with tacit permission from Charles II himself, through the documentary Account of the Growth of Popery and Arbitrary Government, Marvell established himself not only as a model of liberal thought for the eighteenth century but also as an irresistible new voice in political polemic, wittier, more literary, and hence more readable than his contemporaries.

"This book provides a much needed properly edited, extensively and expertly annotated edition that has been wanting in literary and historical studies for more than a hundred years. An extremely important scholarly achievement." Nigel Smith, Princeton University

Annabel Patterson is Sterling Professor of English Emeritus at Yale University. she has published a number of challenging and spirited works of seventeenth-century cultural history, and edited The Prose Works of Andrew Marvell, She is the author of Nobody's Perfect: A New Whig Interpretation of History published by Yale University Press.

GOR010295222
The Prose Works of Andrew Marvell: Volume II, 1676-1678 by Andrew Marvell
Andrew Marvell
Used - Very Good
Hardback
Yale University Press
2004-01-23
528
0300099363
9780300099362
N/A
Book picture is for illustrative purposes only, actual binding, cover or edition may vary.
This is a used book - there is no escaping the fact it has been read by someone else and it will show signs of wear and previous use. Overall we expect it to be in very good condition, but if you are not entirely satisfied please get in touch with us.