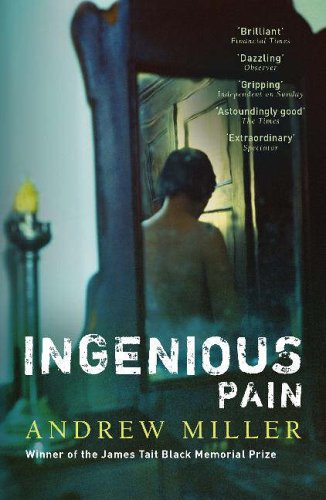 In Stock
£5.49
Andrew Miller's extraordinarily acclaimed and prizewinning debut, featuring an 18th-century surgeon who is unable to feel pain
Like New Very Good Good
8 in stock

At the dawn of the Enlightenment, James Dyer is born unable to feel pain. A source of wonder and scientific curiosity as a child, he rises through the ranks of Georgian society to become a brilliant surgeon. Yet as a human being he fails, for he can no more feel love and compassion than pain. Until, en route to St Petersburg to inoculate the Empress Catherine against smallpox, he meets his nemesis and saviour.

Andrew Miller's first novel, Ingenious Pain, was published by Sceptre in 1997 and greeted as the debut of an outstanding new writer. It won the James Tait Black Memorial Prize, the International IMPAC Dublin Literary Award and the Grinzane Cavour Prize for the best foreign novel published in Italy. It has been followed by Casanova, Oxygen, which was shortlisted for the Booker Prize and the Whitbread Novel of the Year Award in 2001, The Optimists, One Morning Like A Bird, Pure, which won the Costa Book of the Year Award 2011, and The Crossing. Andrew Miller's novels have been published in translation in twenty countries. Born in Bristol in 1960, he currently lives in Somerset.

GOR000557600
Ingenious Pain by Andrew Miller
Andrew Miller
Used - Very Good
Paperback
Hodder & Stoughton General Division
1997-10-11
352
0340682086
9780340682081
Winner of International IMPAC Dublin Literary Award 1999
Book picture is for illustrative purposes only, actual binding, cover or edition may vary.
This is a used book - there is no escaping the fact it has been read by someone else and it will show signs of wear and previous use. Overall we expect it to be in very good condition, but if you are not entirely satisfied please get in touch with us.