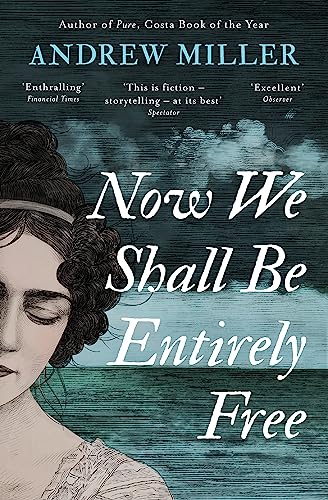 Now We Shall Be Entirely Free
by Andrew Miller

In Stock
£4.49
By the Costa Award-winning author of PURE, a stunning historical novel - the tale of a traumatised soldier on a journey in search of peace, which turns into a nail-biting hunt to the death.
Like New Very Good Good Well Read
Only 1 left

Now We Shall Be Entirely Free Summary

Now We Shall Be Entirely Free: The 'magnificent' novel by the Costa-winning author of PURE by Andrew Miller

* WINNER OF THE HIGHLAND BOOK PRIZE *

* SHORTLISTED FOR THE WALTER SCOTT PRIZE *

The rapturously acclaimed new novel by the Costa Award-winning author of PURE, hailed as 'excellent', 'gripping', 'as suspenseful as any thriller', 'engrossing', 'moving' and 'magnificent'.

One rainswept winter's night in 1809, an unconscious man is carried into a house in Somerset. He is Captain John Lacroix, home from Britain's disastrous campaign against Napoleon's forces in Spain.

Gradually Lacroix recovers his health, but not his peace of mind. He will not - cannot - talk about the war or face the memory of what took place on the retreat to Corunna. After the command comes to return to his regiment, he lights out instead for the Hebrides, unaware that he has far worse to fear than being dragged back to the army: a vicious English corporal and a Spanish officer with secret orders are on his trail.

In luminous prose, Miller portrays a man shattered by what he has witnessed, on a journey that leads to unexpected friendships, even to love. But as the short northern summer reaches its zenith, the shadow of the enemy is creeping closer. Freedom, for John Lacroix, will come at a high price. Taut with suspense, this is an enthralling, deeply involving novel by one of Britain's most acclaimed writers.

Now We Shall Be Entirely Free Reviews

Andrew Miller's first novel, Ingenious Pain, was published by Sceptre in 1997 and greeted as the debut of an outstanding new writer. It won the James Tait Black Memorial Prize, the International IMPAC Dublin Literary Award and the Grinzane Cavour Prize for the best foreign novel published in Italy.

It has been followed by Casanova, Oxygen, which was shortlisted for the Booker Prize and the Whitbread Novel of the Year Award in 2001, The Optimists, One Morning Like A Bird, Pure, which won the Costa Book of the Year Award 2011, and The Crossing.

Andrew Miller's novels have been published in translation in twenty countries. Born in Bristol in 1960, he currently lives in Somerset.

GOR010040681
Now We Shall Be Entirely Free: The 'magnificent' novel by the Costa-winning author of PURE by Andrew Miller
Andrew Miller
Used - Like New
Paperback
Hodder & Stoughton
2019-05-28
432
1444784668
9781444784664
N/A
Book picture is for illustrative purposes only, actual binding, cover or edition may vary.
This is a used book - there is no escaping the fact it has been read by someone else and it will show signs of wear and previous use. Overall we expect it to be in very good condition, but if you are not entirely satisfied please get in touch with us.