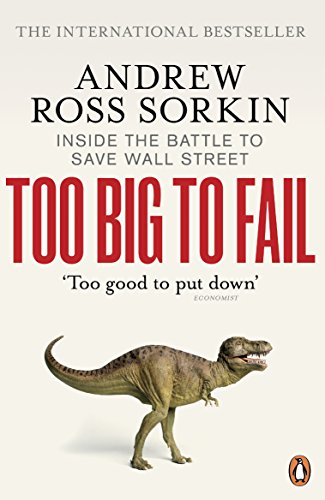 Too Big to Fail
by Andrew Ross Sorkin

In Stock
£5.49
They were masters of the financial universe, flying in private jets and raking in billions. They thought they were too big to fail. This book gives an account of the most powerful men and women at the eye of the financial storm - from Lehman Brothers CEO Dick the gorilla Fuld, to AIG's Joseph Cassano, dubbed 'The Man Who Crashed the World'.
Very Good Good Well Read
25 in stock

Too Big to Fail Summary

Too Big to Fail: Inside the Battle to Save Wall Street by Andrew Ross Sorkin

They were masters of the financial universe, flying in private jets and raking in billions. They thought they were too big to fail. Yet they would bring the world to its knees.

Andrew Ross Sorkin, the news-breaking New York Times journalist, delivers the first true in-the-room account of the most powerful men and women at the eye of the financial storm - from reviled Lehman Brothers CEO Dick 'the gorilla' Fuld, to banking whiz Jamie Dimon, from bullish Treasury Secretary Hank Paulson to AIG's Joseph Cassano, dubbed 'The Man Who Crashed the World'.

Through unprecedented access to the key players, Sorkin meticulously re-creates frantic phone calls, foul-mouthed rows and white-knuckle panic, as Wall Street fought to save itself.

Too Big to Fail Reviews

He has done a remarkable job in producing a lively account that will be hard for subsequent authors to beat * Gillian Tett, FT *
As close to a definitive account as we are likely to get * Dominic Lawson, Sunday Times *
Andrew Ross Sorkin has written a fascinating, scene-by-scene saga of the eyeless trying to march the clueless through Great Depression II * Tom Wolfe *
Andrew Ross Sorkin pens what may be the definitive history of the banking crisis * The Atlantic Monthly *
Sorkin has succeeded in writing the book of the crisis, with amazing levels of detail and access * Reuters *
Too good to put down . . . It is the story of the actors in the most extraordinary financial spectacle in 80 years, and it is told brilliantly . . . It is hard to imagine them being this riveting * Economist *
Sorkin can write. His storytelling makes Liar's Poker look like a children's book * SNL Financial *
The most readable and exciting report of the events surrounding the Lehman collapse that we have seen . . . impeccably sourced * Edmund Conway, Daily Telegraph *
The sense of being in the meeting rooms as hitherto all-conquering alpha male egos fight for their reputations, as their and our world judders, is palpable * Chris Blackhurst, Evening Standard *
Surpassed its rivals with its depth, range of reporting and high quality analysis * Stefan Stern, FT *
A superbly researched and sobering take on the events surrounding the meltdown on Wall Street * Sam Mendes *
With Too Big to Fail , Andrew Ross Sorkin has broken the Barbarians [At The Gate] curse ... Ross Sorkin's ... astonishing narrative of the epic financial crisis of 2008 is an extraordinary achievement that will be hard to surpass as the definitive account * John Gapper, FT *
The heir to Barbarians at the Gate * FT *

Andrew Ross Sorkin is the award-winning chief mergers and acquisitions reporter for the New York Times, a columnist, and assistant editor of business and finance news. He has won a Gerald Loeb Award, the highest honor in business journalism, and a Society of American Business Editors and Writers Award. In 2007, the World Economic Forum names him a Young Global Leader.

GOR002229683
Too Big to Fail: Inside the Battle to Save Wall Street by Andrew Ross Sorkin
Andrew Ross Sorkin
Used - Very Good
Paperback
Penguin Books Ltd
2010-06-26
640
0141043164
9780141043166
Short-listed for Financial Times/Goldman Sachs Business Book of the Year Award 2010 Short-listed for BBC Samuel Johnson Prize for Non-Fiction 2010
Book picture is for illustrative purposes only, actual binding, cover or edition may vary.
This is a used book - there is no escaping the fact it has been read by someone else and it will show signs of wear and previous use. Overall we expect it to be in very good condition, but if you are not entirely satisfied please get in touch with us.