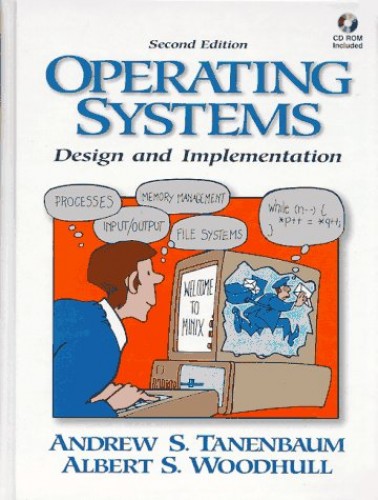 In Stock
£6.99
A practical manual on operating systems, which describes a small UNIX-like operating system, demonstrating how it works and illustrating the principles underlying it. The relevant sections of the MINIX source code are described in detail, and the book has been revised to include updates in MINIX.
Well Read
Only 1 left

This book offers a unique and carefully integrated combination of principles and practice. While the usual principles are covered in detail, the book also describes a small, but real UNIX-like operating system: MINIX. It shows how it works and illustrates the principles behind it. By using MINIX, students learn principles and then can apply them in hands-on system design projects.

Andrew S. Tanenbaum has a B.S. Degree from M.I.T. and a Ph.D. from the University of California at Berkeley. He is currently a Professor of Computer Science at the Vrije Universiteit in Amsterdam, The Netherlands, where he heads the Computer Systems Group. He is also Dean of the Advanced School for Computing and Imaging, an interuniversity graduate school doing research on advanced parallel, distributed, and imaging systems. Nevertheless, he is trying very hard to avoid turning into a bureaucrat.

Prof. Tanenbaum has also produced a considerable volume of software. He was the principal architect of the Amsterdam Compiler Kit, a widely-used toolkit for writing portable compilers, as well as of MINIX, a small UNIX clone intended for use in student programming labs. Together with his Ph.D. students and programmers, he helped design the Amoeba distributed operating system, a high-performance microkernel-based distributed operating system. The MINIX and Amoeba systems are now available for free via the Internet..

GOR003565290
Operating Systems: Design And Implementation: United States Edition by Andrew S. Tanenbaum
Andrew S. Tanenbaum
Used - Well Read
Hardback
Pearson Education (US)
1996-12-19
940
0136386776
9780136386773
N/A
Book picture is for illustrative purposes only, actual binding, cover or edition may vary.
This is a used book - there is no escaping the fact it has been read by someone else and it will show signs of wear and previous use. Overall we expect it to be in very good condition, but if you are not entirely satisfied please get in touch with us.