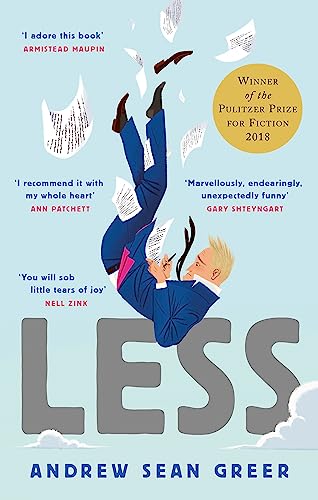 The Pulitzer prize-winning novel about a failed writer trying to escape his problems by traveling abroad.

Less: Winner of the Pulitzer Prize for Fiction 2018 by Andrew Sean Greer

WINNER OF THE PULITZER PRIZE FOR FICTION 2018

'You will sob little tears of joy' Nell Zink

'I recommend it with my whole heart' Ann Patchett

'I adore this book' Armistead Maupin

WHO SAYS YOU CAN'T RUN AWAY FROM YOUR PROBLEMS?

Arthur Less is a failed novelist about to turn fifty. A wedding invitation arrives in the post: it is from an ex-boyfriend of nine years who is engaged to someone else. Arthur can't say yes - it would be too awkward; he can't say no - it would look like defeat. So, he begins to accept the invitations on his desk to half-baked literary events around the world.

From France to India, Germany to Japan, Arthur almost falls in love, almost falls to his death, and puts miles between him and the plight he refuses to face. Less is a novel about mishaps, misunderstandings and the depths of the human heart.

I adore this book -- Armistead Maupin
Greer is one of the most talented writers around -- Michael Chabon
A really smart, funny book that pulls you up instead of down . . . It's hysterical, and the writing is fantastic -- Ann Patchett
The most deftly funny romantic comedy I've read in years. If you have a sentimental bone in your body (I have 206),the ending will make you sob little tears of joy -- Nell Zink
Marvelously, unexpectedly, endearingly funny. A love story focused on the erroneous belief that the second half of life will pale in comparison to the first. Guess what? It won't! -- Gary Shteyngart
Less is the funniest, smartest, and most humane novel I've read since The Imperfectionists . . . Greer writes sentences of arresting lyricism and beauty. His metaphors come at you like fireflies . . . Like Arthur, Andrew Sean Greer's Less is excellent company. It's no less than bedazzling, bewitching and be-wonderful -- Christopher Buckley * New York Times Book Review *
A generous book, musical in its prose and expansive in its structure and range, about growing older and the essential nature of love -- Judges of the Pulitzer Prize for Fiction 2018
A fast and rocketing read with everything I want from a story - moments of high humor, moments of genuine wisdom, sharp insights, and gorgeous images. A wonderful, wonderful book! -- Karen Joy Fowler, author of We Are All Completely Beside Ourselves
Greer is an exceptionally lovely writer, capable of mingling humor with sharp poignancy . . . Brilliantly funny . . . Greer's narration, so elegantly laced with wit, cradles the story of a man who loses everything: his lover, his suitcase, his beard, his dignity -- Ron Charles * Washington Post *
Less is philosophical, poignant, funny and wise, filled with unexpected turns . . . Although Greer is gifted and subtle in comic moments, he's just as adept at ruminating on the deeper stuff. His protagonist grapples with aging,loneliness, creativity, grief, self-pity and more * San Francisco Chronicle *
Greer elevates Less' picaresque journey into a wise and witty novel. This is no Eat, Pray Love story of touristic uplift, but rather a grand travelogue of foibles, humiliations and self-deprecation, ending in joy, and a dollop of self-knowledge * National Book Review *
Greer, the author of wonderful, heartfelt novels including The Confessions of Max Tivoli, The Impossible Lives of Greta Wells and The Story of a Marriage, shows he has another powerful weapon in his arsenal: comedy. And who doesn't need a laugh right about now? * Miami Herald *
Greer writes beautifully . . . Entirely successful in the authorial sleights of hand that make the narrator fade into the background - only to have an identity revealed at the end in a wonderful surprise * Publishers Weekly *
Greer's evocations of the places Arthur visits offer zesty travelogue pleasures -- Michael Upchurch * Seattle Times *
An engaging, funny literary romp * Minneapolis Star Tribune *
Dressed in his trademark blue suit, Less adorably butchers the German language, nearly falls in love in Paris, celebrates his birthday in the desert, and, somewhere along the way, discovers something new and fragile about the passing of time, about the coming and going of love, and what it means to be the fool of your own narrative. It's nothing less than wonderful -- Cat Acree * BookPage *
Greer is a masterful writer who sees the best in humankind, and this novel is no exception * Esquire *
The charms of this light-footed, melancholy novel are soft and subtle . . . Less is a nuanced, delicately sketched example of someone whose life has been dogged by feelings of inadequacy simply because he has long allowed such feelings to dominate his life . . . rest assured, Less is most awfully good * Big Issue *
Faced with an invitation to his ex-lover's wedding and his looming 50th birthday, failed writer Arthur takes the only route he knows and legs it by accepting all the invitations he's been offered to literary festivals around the world. Jumping from country to country with each chapter, Arthur seems beset by irrelevance but slowly shines forth in one comic situation after another (in Italy, he finds himself up for a literary prize judged by 12 high school students) until the book unexpectedly blooms into an ode to humanity. Read and weep * Emerald Street *
Less is witty, wise, and wistful in equal measure, sometimes all in the space of one page . . . a charming novel, and the vehicle for the most amiable of heroes * Independent *
Less is very definitely more. This ingenious and hilarious Pulitzer Prize-winning novel about a middle aged, almost successful gay author running away from his problems is one of the most brilliant and endearing books we've read in ages. A book about aging, relationships, disappointment and the inevitable absurdity of life, Less is like a friend you didn't know you had, who wraps your heartache in laughter and makes you see that it's all going to work out fine in the end. We adored this wonderful book * Attitude Magazine *
This brilliant, Pulitzer-winning skewering of the literary world tracks a lovelorn writer on a voyage of self-discovery . . . Less is about anyone who has allowed their calling to define them at the expense of their humanity. Writers may blush in the mirror it holds up to them, but many readers will find it as endearing as the very best of Armistead Maupin * Guardian *
Less is beautifully written, witty, sharp and compelling, and the reminiscing is dreamy and rueful, peppered with optimism of the moment and blissful ignorance . . . a gorgeous, unforgettable work that, whatever your gender or orientation, cannot fail to tell you something about yourself -- Justin Myers * Independent *
Charming, languid and incredibly funny, I absolutely adored Arthur -- Jenny Colgan
A highly entertaining, bittersweet, quirky, comedy about the unfathomable mysteries of the human heart. Ideal for holiday reading * The Lady *
I loved Less, Andrew Sean Greer's novel in which his hero Arthur Less - gay author, recently dumped, turning 50 - goes on a voyage of rediscovery via Japan and Italy. Think Eat Pray Love with A-levels, the novel managed to win this year's Pulitzer Prize, despite being funny -- Allison Pearson * Telegraph *

Check out this gentle, witty Pulitzer-winning story about failed novelist Arthur Less . . . Greer's
sparkling prose covers his mishaps, misunderstandings and the fragility of the human heart

Comic novels rarely if ever get awarded the Pulitzer Prize, so it's a testament to Greer's deft command over the
form that this picaresque but poignant romp broke through that particular ceiling

* Herald Scotland *
Like a rare diamond, Greer's prose sparkles . . . I can't think of a better book to stash in your suitcase -- Maggie O'Farrell * Guardian *
Reader, I laughed and I cried: this is a hilarious, heart-warming and thoroughly midlife-enhancing book. On one level. Less is a glorious anthology of all the exquisite humiliations that can be heaped upon a writer . . . it is also a lyrical, moving essay on the rewards of creativity and perseverance in the second half of life. Oh. and it is wise, generous of spirit and beautifully written. More! -- Andy Miller * Spectator *
Less is witty, wise, and wistful in equal measure, sometimes all in the space of one page . . . a charming novel, and the vehicle for the most amiable of heroes * Independent *
Andrew Sean Greer is the bestselling author of five works of fiction, including The Confessions of Max Tivoli, which was named a best book of 2004 by the San Francisco Chronicle and the Chicago Tribune. He is the recipient of the Northern California Book Award, the California Book Award, the New York Public Library Young Lions Award, the O Henry award for short fiction and fellowships from the National Endowment for the Arts and the New York Public Library. Greer lives in San Francisco. He has traveled to all of the locations in this novel, but he is only big in Italy.
GOR009151495
9780349143590
0349143595
Less: Winner of the Pulitzer Prize for Fiction 2018 by Andrew Sean Greer
Andrew Sean Greer
Used - Very Good
Paperback
Little, Brown Book Group
2018-05-14
272
Winner of Pulitzer Prize for Fiction 2018 (UK) Long-listed for Australian Book Industry Awards International Book of the Year 2019 (UK)
Book picture is for illustrative purposes only, actual binding, cover or edition may vary.
This is a used book - there is no escaping the fact it has been read by someone else and it will show signs of wear and previous use. Overall we expect it to be in very good condition, but if you are not entirely satisfied please get in touch with us
Trustpilot