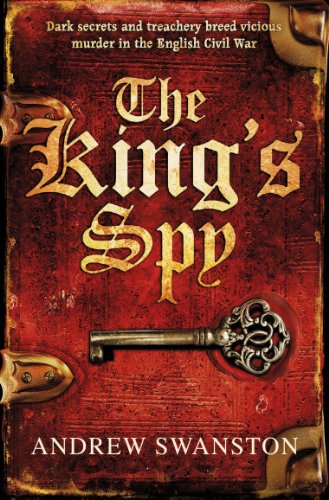 The King's Spy
by Andrew Swanston

Used Price
£5,79
New RRP £8,99
Free Shipping in the UK
Aware of Thomas's background as a mathematician and his expertise in codes and ciphers, the king has summoned him to his court in Oxford.

On arrival, Thomas soon discovers that nothing at court is straightforward.

England is at war with itself. King Charles I has fled London, his negotiations with Parliament in tatters. The country is consumed by bloodshed.

For Thomas Hill, a man of letters quietly running a bookshop in the rural town of Romsey, knowledge of the war is limited to the rumours that reach the local inn.

When a stranger knocks on his door one night and informs him that the king's cryptographer has died, everything changes. Aware of Thomas's background as a mathematician and his expertise in codes and ciphers, the king has summoned him to his court in Oxford.

On arrival, Thomas soon discovers that nothing at court is straightforward. There is evidence of a traitor in their midst. Brutal murder follows brutal murder. And when a vital message encrypted with a notoriously unbreakable code is intercepted, he must decipher it to reveal the king's betrayer and prevent the violent death that failure will surely bring.

Andrew Swanston read law at Cambridge, but was inspired to write by his lifelong interest in early modern history. His Thomas Hill novels - The King's Spy, The King's Exile and The King's Return - are set against the backdrops of the English Civil War, Cromwell's Commonwealth and the early Restoration respectively. He is also the author of Waterloo: The Bravest Man and Beautiful Star and Other Stories. His first historical thriller set during the reign of Elizabeth I - Incendium (published in paperback as The Incendium Plot) - introduced readers to the academic, lawyer and intelligencer Dr Christopher Radcliff, whose adventures continue in Chaos. Andrew Swanston lives in Surrey.

GOR005355798
The King's Spy: (Thomas Hill 1) by Andrew Swanston
Andrew Swanston
Thomas Hill Novels
Used - Very Good
Paperback
Transworld Publishers Ltd
2013-08-01
464
0552166103
9780552166102
N/A
Book picture is for illustrative purposes only, actual binding, cover or edition may vary.
This is a used book - there is no escaping the fact it has been read by someone else and it will show signs of wear and previous use. Overall we expect it to be in very good condition, but if you are not entirely satisfied please get in touch with us.