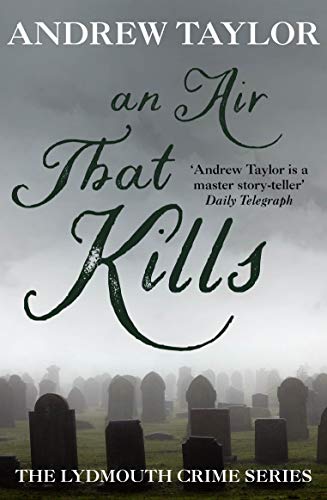 An Air That Kills by Andrew Taylor

The first in the acclaimed Lydmouth crime series, set on the Welsh/English border in the years after World War II

An Air That Kills: The Lydmouth Crime Series Book 1 by Andrew Taylor

From the No.1 bestselling author of The Ashes of London and The Fire Court, this is the first instalment in the acclaimed Lydmouth series

Workmen in the small market town of Lydmouth are demolishing an old cottage. A sledgehammer smashes into what looks like a solid wall. Instead, layers of wallpaper conceal the door of a locked cupboard which holds a box - and in the box is the skeleton of a young baby.

Items within the box suggest that the baby was entombed early in the nineteenth century, but when another man is also found dead, the evidence suggests that the baby's death is more recent and that a killer is on the loose. For Journalist Jill Francis, newly arrived from London, this looks like her first story to chase ...

The most under-rated crime writer in Britain today * Val McDermid *
Captures perfectly the drab atmosphere and cloying morality of the 1950s . . . Taylor is an excellent writer. He plots with care and intelligence and the solution to the mystery is satisfyingly chilling * The Times *
There is no denying Taylor's talent, his almost Victorian prose exudes a quality uncommon among his contemporaries... his eye for detail and an enviable ability to dissect relationships and communal habits make for a pleasurable read * Time Out *
Engrossing launch of a series . . . Taylor subtly weaves the threads of this thoughtful, melancholy tale until they become an interlaced whole before the reader's eyes * Publishers Weekly *

GOR000754240
9780340617137
0340617136
An Air That Kills: The Lydmouth Crime Series Book 1 by Andrew Taylor
Andrew Taylor
Used - Very Good
Paperback
Hodder & Stoughton
1995-02-02
384
N/A
Book picture is for illustrative purposes only, actual binding, cover or edition may vary.
This is a used book - there is no escaping the fact it has been read by someone else and it will show signs of wear and previous use. Overall we expect it to be in very good condition, but if you are not entirely satisfied please get in touch with us
Trustpilot