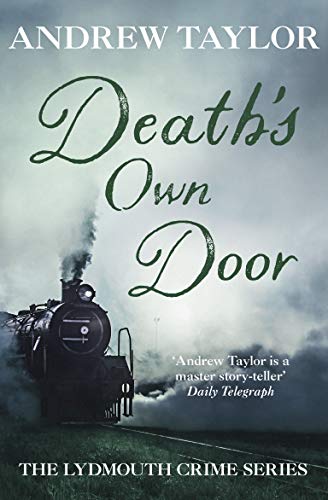 Death's Own Door
by Andrew Taylor

In Stock
£5.99
The sixth in the acclaimed Lydmouth crime series, set on the Welsh/English border in the years after World War II
Very Good Well Read
6 in stock

From the No.1 bestselling author of The Ashes of London and The Fire Court, this is the sixth instalment in the acclaimed Lydmouth series

When the body of Rufus Moorcroft, a middle-aged widower with a distinguished war record, is found in his summerhouse, the verdict is suicide. But both reporter Jill Francis and her lover, Detective Richard Thornhill, approaching the case from different angles, discover there's more to it than that.

The key to the mystery stretches back to a highly-charged summer before the war, and back to another death. A local asylum plays a part, as do a moderately famous artist and his wife; Superintendent Williamson, now retired and loathing it; Councillor Bernie Broadbent - a man with more pies than fingers to put in them; a Cambridge don; an aristocratic unmarried mother, now gleefully drawing her old-age pension; and - to Thornhill's surprise and growing horror - his own wife, Edith.

An absorbing read * Susanna Yager, Sunday Telegraph *
Taylor is building up a nice fan base for his series of mysteries set in the village of Lydmouth just after the Second World War . . . DEATH'S OWN DOOR will appeal to those who love a traditional English mystery novel * Irish Times *
Taylor's Lydmouth series is turning the classical detective story into a complex picture of our own past * Independent *
Page turningly complicated plots * The Oxford Times *
The most underrated crime writer in Britain today * Val McDermid *

GOR001195540
Death's Own Door: The Lydmouth Crime Series Book 6 by Andrew Taylor
Andrew Taylor
Used - Very Good
Paperback
Hodder & Stoughton General Division
2002-03-14
384
0340696028
9780340696026
N/A
Book picture is for illustrative purposes only, actual binding, cover or edition may vary.
This is a used book - there is no escaping the fact it has been read by someone else and it will show signs of wear and previous use. Overall we expect it to be in very good condition, but if you are not entirely satisfied please get in touch with us.