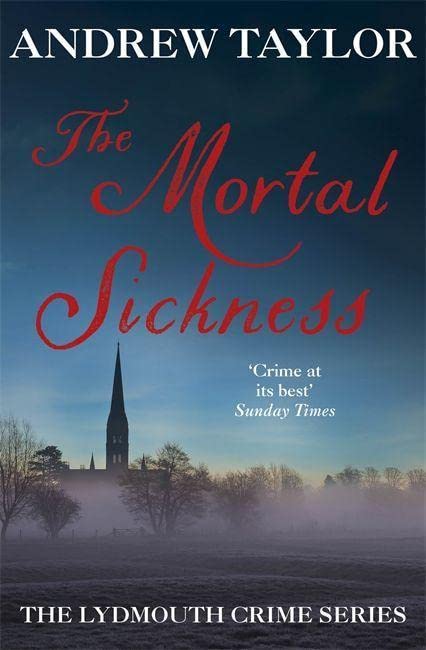 The Mortal Sickness
by Andrew Taylor

In Stock
£3.59
The second in the acclaimed Lydmouth crime series, set on the Welsh/English border in the years after World War II
Very Good Good Well Read
12 in stock

From the No.1 bestselling author of The Ashes of London and The Fire Court, this is the second instalment in the acclaimed Lydmouth series

When a spinster of the parish is found bludgeoned to death in St John's, and the church's most valuable possession, the Lydmouth chalice, is missing, the finger of suspicion points at the new vicar, who is already beset with problems.

The glare of the police investigation reveals shabby secrets and private griefs. Jill Francis, struggling to find her feet in her new life, stumbles into the case at the beginning. But even a journalist cannot always watch from the sidelines. Soon she is inextricably involved in the Suttons' affairs. Despite the electric antagonism between her and Inspector Richard Thornhill, she has instincts that she can't ignore . . .

Taylor's Lydmouth series is turning the classical detective story into a complex picture of our own past * Independent *
Andrew Taylor is one of the most interesting, if not the most interesting novelist writing on crime in England today * Spectator *
The people depicted here are real and believable and the drabness and genteel facade of Fifties England is skilfully brought to life. Taylor is, as always, adept at showing the reality beneath the surface * Sunday Telegraph *
How skilfully he recreates the atmosphere of the time through innuendo, attitude and detail . . .Taylor is the master of small lives writ large and he has carved a classic detective story * Frances Fyfield *
The most under-rated crime writer in Britain today * Val McDermid *

Andrew Taylor is a British crime and historical novelist, winner of the Cartier Diamond Dagger (for lifelong excellence in the genre) and the triple winner of the Historical Dagger. His books include the Sunday Times bestsellers The Ashes of London and The Fire Court, the international bestseller The American Boy (a Richard and Judy selection); the Roth Trilogy (filmed for TV as Fallen Angel); the Lydmouth Series; the William Dougal Series, The Anatomy of Ghosts, shortlisted for the Theakston's Old Peculier Crime Novel of the Year, and The Scent of Death. He lives on the borders of England and Wales. He reviews for the Spectator and The Times. For more information about Andrew Taylor and his books, see: www.andrew-taylor.co.uk or follow him on twitter: @andrewjrtaylor

GOR001104409
The Mortal Sickness: The Lydmouth Crime Series Book 2 by Andrew Taylor
Andrew Taylor
Used - Very Good
Paperback
Hodder & Stoughton General Division
1996-04-18
352
0340617144
9780340617144
N/A
Book picture is for illustrative purposes only, actual binding, cover or edition may vary.
This is a used book - there is no escaping the fact it has been read by someone else and it will show signs of wear and previous use. Overall we expect it to be in very good condition, but if you are not entirely satisfied please get in touch with us.