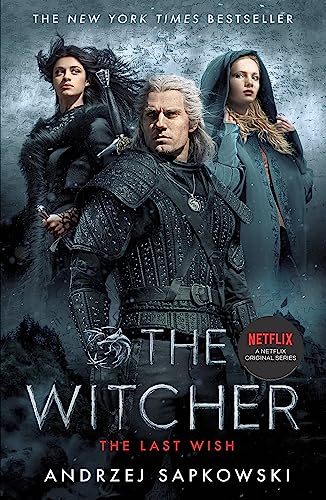 The Last Wish
by Andrzej Sapkowski

Used Price
£2.69
New RRP £8.99
Free Shipping in the UK
TV tie-in edition of the New York Times bestseller that introduces Geralt the Witcher, who holds the line against the monsters plaguing humanity in this first book in the award-winning Witcher series.
Very Good Well Read

Introducing Geralt the Witcher - revered and hated - who holds the line against the monsters plaguing humanity in the bestselling series that inspired the Witcher video games and a major Netflix show.

Geralt of Rivia is a Witcher, a man whose magic powers and lifelong training have made him a brilliant fighter and a merciless assassin.

Yet he is no ordinary killer: he hunts the vile fiends that ravage the land and attack the innocent.

Andrzej Sapkowski, winner of the World Fantasy Lifetime Achievement award, started an international phenomenon with his Witcher series. The Last Wish is the perfect introduction to this one-of-a-kind fantasy world.

Like a complicated magic spell, a Sapkowski novel is a hodge podge of fantasy, intellectual discouse and dry humour. Recommended * Time Magazine *
Character interplay is complex, unsentimental and anchored in brutal shared history * SFX *
Delightfully dry humour, mythology brimming with radical creatures and a group of interesting characters, The Last Wish is a great introduction to this universe * Fantasy Book Review *
Sapkowski has a confident and rich voice which permeates the prose and remains post-translation. I'd recommend this to any fan of Heroic or Dark fiction * SF Book *
One of the best and most interesting fantasy series I've ever read * Nerds of a Feather *
Like Mieville and Gaiman, [Sapkowski] takes the old and makes it new . . . [a] fresh take on genre fantasy * Foundation *
There's lots of imagination on show, the writing has a strong voice, and the Witcher is an entertaining character * Mark Lawrence *
Refreshing and a lot of fun to read * Grimdark Magazine *
Captivating, often nerve-wracking, and truthfully . . . rip-roaring fun * Fantasy Hive *

Andrzej Sapkowski was born in 1948 in Poland. He studied economy and business, but the success of his fantasy cycle about the sorcerer Geralt of Rivia turned him into a bestselling writer and he is now one of Poland's most famous and successful authors, selling more in his own country than Stephen King or Michael Crichton.

GOR010304029
The Last Wish: Introducing the Witcher - Now a major Netflix show by Andrzej Sapkowski
Andrzej Sapkowski
The Witcher
Used - Very Good
Paperback
Orion Publishing Co
2019-12-10
288
1473226406
9781473226401
N/A
Book picture is for illustrative purposes only, actual binding, cover or edition may vary.
This is a used book - there is no escaping the fact it has been read by someone else and it will show signs of wear and previous use. Overall we expect it to be in very good condition, but if you are not entirely satisfied please get in touch with us.