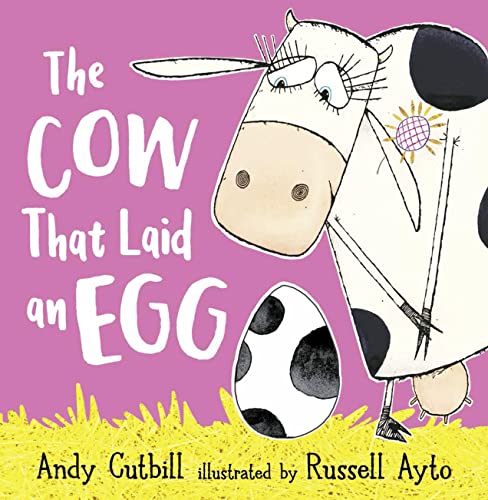 The Cow That Laid An Egg
by Andy Cutbill

A madcap, yet moving, story about having the courage of one's convictions, even when others doubt you, from the creator of 'Albie', Andy Cutbill, and the award-winning illustrator, Russell Ayto.

The Cow That Laid An Egg Summary

The Cow That Laid An Egg by Andy Cutbill

A madcap, yet moving, story about having the courage of one's convictions, even when others doubt you, from the creator of 'Albie', Andy Cutbill, and the award-winning illustrator, Russell Ayto.

Marjorie the cow doesn't feel very special. She can't ride bicycles or do cartwheels like the other cows. But one morning, Marjorie is astonished to discover something extraordinary...

But does the baby inside the egg really belong to Marjorie? Emotions run high in the farmyard as everyone waits to find out...

The Cow That Laid An Egg Reviews

Praise for `The Witch's Children', illustrated by Russell Ayto:

GOR010193175
The Cow That Laid An Egg by Andy Cutbill
Andy Cutbill
Used - Like New
Paperback
HarperCollins Publishers
2008-07-01
32
0007179685
9780007179688
N/A
Book picture is for illustrative purposes only, actual binding, cover or edition may vary.
The book has been read, but looks new. The book cover has no visible wear, and the dust jacket is included if applicable. No missing or damaged pages, no tears, possible very minimal creasing, no underlining or highlighting of text, and no writing in the margins.