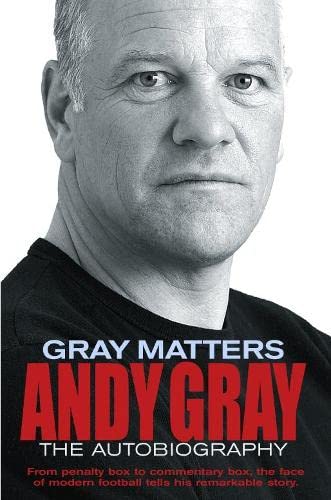 In Stock
£3.99
From fearsome striker to the most respected football commentator in the country, this is the story of a footballing legend
Very Good Good
7 in stock

Andy Gray has been at the forefront of British football for over three decades. Now, for the first time, he tells his own remarkable story, and that of the modern game.

From a fanatical footballing household in Glasgow, Andy worked his way to become a teenage prodigy at Dundee. But it was in England that Andy's name was cemented as one of Europe's top strikers. At Aston Villa he scored 69 goals in 141 appearances and remains the only footballer to win both the PFA Player and Young Player of the Year in the same season. Greater glories awaited him at Everton, where he won the League, the FA Cup and the European Cup Winners Cup. These triumphs - along with the inspiring (and infuriating) managers, the goals, the games and the fans - are vividly brought to life while also explaining how the game was evolving around him. He also describes the early days of Sky Television, and the temptation of becoming a manager.

Andy Gray is unique in tracing a line from the beginnings of the modern game to the Premiership, while still remaining passionate and impartial.

Andy Gray began his professional career in 1973, is the only footballer to be named PFA Player and Young Player of the Year in the same season and was at one time the most expensive footballer in Britain. Having won almost every domestic honour, he joined Sky Sports in 1991 where, among other accolades, he has been named The Royal Television Society's Sports Presenter of the Year.

GOR000637696
Gray Matters: My Autobiography by Andy Gray
Andy Gray
Used - Very Good
Paperback
Pan Macmillan
2005-06-01
288
0330431994
9780330431996
N/A
Book picture is for illustrative purposes only, actual binding, cover or edition may vary.
This is a used book - there is no escaping the fact it has been read by someone else and it will show signs of wear and previous use. Overall we expect it to be in very good condition, but if you are not entirely satisfied please get in touch with us.