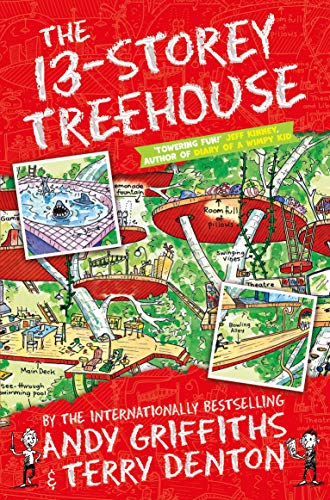 The 13-Storey Treehouse
by Andy Griffiths

In Stock
£3.99
Laugh-out-loud adventures in the wackiest treehouse ever! The first in a highly illustrated series for fans of Diary of a Wimpy Kid and Barry Loser.
Like New Very Good Good Well Read
Only 2 left

The 13-Storey Treehouse by Andy Griffiths

The 13-Storey Treehouse is the first book in Andy Griffiths and Terry Denton's wacky treehouse adventures, where the laugh-out-loud story is told through a combination of text and fantastic cartoon-style illustrations.

Andy and Terry live in the WORLD'S BEST treehouse! It's got a giant catapult, a secret underground laboratory, a tank of man-eating sharks and a marshmallow machine that follows you around and shoots marshmallows into your mouth whenever you're hungry! Just watch out for the sea monkeys, and the monkeys pretending to be sea monkeys, and the giant mutant mermaid sea monster . . . Oh, and, whatever you do, don't get trapped in a burp-gas-filled bubble . . . !

Well, what are you waiting for? Come on up!

With its slapstick humour, brilliant absurdities and some bonus puzzles to solve at the back of the book, The 13-Storey Treehouse is the best 'tall story' you'll read this year! * Lancashire Evening Post *
Longtime collaborators Griffiths and Denton (Killer Koalas from Outer Space) get metafictional in their latest book (first published in Australia), and the result is anarchic absurdity at its best... Denton's manic cartooning captures every twist and turn in hilarious detail, as babies are pelted with garbage, yapping dogs squashed, and monkeys catapulted into the distance. A sequel was published last year in Australia and can't arrive soon enough. -- Publishers Weekly * Publishers Weekly *
Full of crazy, funny pictures, which will make you laugh . . . Extremely enjoyable, very funny and easy to read! -- SophieStarlight * Guardian.com *
Especially good for reluctant readers as it is heavily illustrated and VERY funny . . . This really is the coolest treehouse ever! * Angels & Urchins *
Packed with cartoons and craziness * Sunday Express *
My son loved the cartoon images, the great imagination and has since brought the next book in the series. * Toppsta Reviewer *
This book is about friends Andy and a Terry that live in a really cool 13-storey treehouse, with cool things like a bowling alley, games room and secret lab. They invent things and write things; Andy does the writing and Terry does the pictures. I could read this book on my own without assistance. I read it pretty quickly as it was really interesting and funny, so I wanted to keep reading it. I liked there was chapters, so I could read to the end of the chapter and knew where I was picking up, and each chapter was a good length. I liked at the end of the book there were fun things to do; a word search, maze, spot the difference, a quiz and jokes. The black and white illustrations helped bring the book to life. Chapter 7 the monster mermaid, maybe be scary to some readers. The pictures of the monster aren't really scary, but what is written might scare some; talks about eating people, but goes into detail; ripping limbs, crushing heads etc, so a bit gruesome. One chapter has one word all the way through, which was silly but funny. The friends get up to some crazy things, an enjoyable book. * Toppsta Reviewer *
I thought that this book was funny because of the flying cats. This book had lots of animals in it. * Toppsta Reviewer *
My son absolutely adores this whole series of books. They are hilariously funny but so imaginative and creative. I've recommended them to so many people and haven't yet found a child who doesn't love them. This first book sets the scene with Andy and Terry - the characters and authors/illustrators - living in a treehouse with 13 stories who are meant to be writing a book but keep getting distracted by an endless stream of hilarious madness. * Toppsta Reviewer *

Having read The 78-Storey Treehouse and lived it we requested this from the library.

My son loves these books and studies the illustrations which adorn every page.
He finds the stories very funny and likes that it has the same characters (the author and illustrator!!)

Definitely recommend this book - and we are now moving on to another in the series from the library!

My son: I like this book because of the funny pictures. One of my favourite ones was of a man on the toilet flying using balloons. It is funny how Terry will do anything not to write their book. I think it is a great book.

Mum: My son has been reading this aloud to me. Whilst there are over two hundred pages to this book, a lot of it is taken up with humorous black and white illustrations. It is quite a wacky sort of book, with an off beat sense of humour (sea monsters disguised as mermaids, catnaries (cross between a cat and a canary), self portrait of finger labelled with moose, finger prince, singing flea.... etc.) which definitely appeals to my seven year old. We bought this as part of a set from Book People. So thankfully it has been a hit so far.

I bought this book (the first in a series) on the basis of many positive reviews. Having now read it, I know my decision is vindicated. It's funny, hugely imaginative and has LOTS of pictures. What child would not want a treehouse with see-through swimming pool, lemonade fountain, games room, bowling alley and marshmallow machine? Besides, this one is also home to book-making duo Andy, the writer, and Terry, the illustrator. But story-making isn't always straightforward, especially when there are gorillas to contend with. No matter, flying cats to the rescue! And when the story is over, there are still jokes, a spot-the-difference, a maze, wordsearch and treehouse triva to enjoy.

Children with the latest brain-to-brain-information technology will be able to read it; others will have to ask for it at the library or a bookshop. They will also want to visit http://www.andygriffiths.com.au/ for loads more fun and the latest from author Andy Griffiths.

* Toppsta Reviewer *
I liked this book as it was funny, adventures and most importantly troublesome.Andy and Terry were hilariously brilliant. * Toppsta Reviewer *
Brilliant series and if you haven't read them yet why not? Start at the beginning and work through them all. Laugh out loud funny and I love reading about all the things they have in their treehouse. * Toppsta Reviewer *
I bought the set of these after reading the other Toppsta reviews. My son read this book solidly in one day. He has LOVED it, the mix of text and illustrations is ideal for this age range, I could hear him laughing away to himself whilst he was reading it, although I'm not convinced he followed the whole story, he has since read most of it again (as we were out and the next one was at home) A fabulous buy that will be read time and time again. * Toppsta Reviewer *
This is silly and fun and a great book to encourage of love of reading in young children. I read this to my 5 year old daughter and months later she still makes reference to a scene in the book. She is a strong reader for her age and wanted to get the other books in the series. She started reading more bits of them herself before devouring the 65 and 78-storey treehouse books entirely by herself. The 78-Storey Treehouse she read in one sitting. She can't wait for the 91-Storey Treehouse to come out later this year. * Toppsta Reviewer *

Read to my Year 3 class (30 children, ages 7-8) who all love Diaries of a Wimpy Kid and Tom Gates. (This book initially reminded me of these due to the mixture of text and drawings)
They really enjoyed the quirky storyline and bizarre sense of humour running throughout.
Two said it reminded them of 'You're a Bad Man, Mr Gum ('The Truth is a lemon meringue!).

The children particularly enjoyed how the illustrations and text were given equal importance and it has already inspired some to start their own journals chronicling their daily life in more detail. The rest of the series was in our book corner for no more than a few minutes before being signed out to be shared with reading buddies, friends and family.
Three turned up with their own copy of this book the following week!

Another highlight: a Mum who had earlier despaired of finding a book that her son would love wrote in to thank me for sending the first book home as her son has now devoured the first three books!

Disclaimer: We won the first four books in the series in a giveaway by Lovereading4kids and Macmillan Kids. This in now way affects the tough judgement that all thirty children have passed on this book.

* Toppsta Reviewer *
My daughter and i loved this book - a fulfilled adventure about two writers trying to find inspiration for their next book. The story follows them through all the mishaps on the way!! Full of fantastic, crazy illustrations throughout. * Toppsta Reviewer *
This book is about a gigantic treehouse with two boys named Andy and Terry. They write stories together. Andy writes and Terry draws the pictures. When I say 'gigantic treehouse', I mean a treehouse that has thousands of rooms It has a giant catapult, a games room, a kitchen, two bedrooms, a man-eating shark tank (yikes!), a bowling alley, a see-through swimming pool and many more. Andy and Terry actually LIVE in the treehouse. I would really love to live in a treehouse like that - who wouldn't? I thought this book was hilarious, surprising (like when a mermaid suddenly turned into a sea monster and tried to eat the boys!) and very interesting. I read this book easily without any help and my mum has already ordered The 26-Storey Treehouse! * Toppsta Reviewer *

Andy Griffiths is Terry's best mate. He is also Australia's number one children's author! His books, including his popular Treehouse series, have been hugely successful internationally, winning awards and becoming bestsellers in the UK and the USA as well as in his homeland, Australia. The fourth Treehouse book, The 52-Storey Treehouse, won the Australian Book Industry Awards Book of the Year prize, the first children's book to ever do so. Andy thrives on having an audience: he has worked as a high-school teacher, been the lead singer in a rock band and a stand-up comedian. He is a passionate advocate for literacy, has two daughters and lives in Melbourne, Australia.

Terry Denton is Andy's best mate. He is also a bestselling and award-winning writer and illustrator based in Melbourne, Australia. Among other things, he worked on the Horrible Science series for Scholastic UK. He lives by the beach with his wife and three kids.

GOR008104447
The 13-Storey Treehouse by Andy Griffiths
Andy Griffiths
The Treehouse Books
Used - Like New
Paperback
Pan Macmillan
2015-01-29
256
1447279786
9781447279785
Winner of Sainsbury's Children's Book Awards: Fiction for Age 5-9 Years 2015
Book picture is for illustrative purposes only, actual binding, cover or edition may vary.
This is a used book - there is no escaping the fact it has been read by someone else and it will show signs of wear and previous use. Overall we expect it to be in very good condition, but if you are not entirely satisfied please get in touch with us.