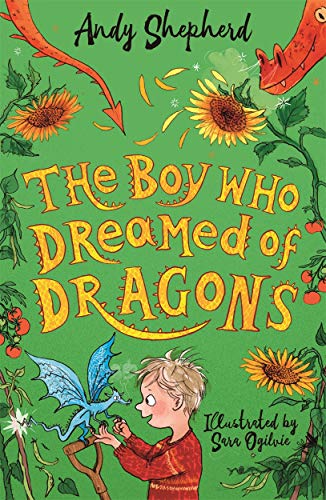 In Stock
£8.29
A wonderful new story in the enchanting THE BOY WHO GREW DRAGONS series Eleven-year-old Tomas has a secret friend like no other: Flicker, a dragon with glittering eyes and scales that flicker from fiery orange to ruby red.
New£8.29
5 in stock

'A delicious series that is as unexpected, as hilarious and as more-ish as any you could wish for - or grow! A true must-read for anyone who believes that a little magic, coupled with the soils of a garden, can bring forth a brilliant adventure or three' Onjali Rauf, author of The Boy at the Back of the Class 'Shepherd has created a magical series that makes eyes shine with wonder, hearts swell with warmth, and rooms fill with giggles' Sophie Anderson, author of The House with Chicken Legs Eleven-year-old Tomas has a secret friend like no other: Flicker, a dragon with glittering eyes and scales that flicker from fiery orange to ruby red. But Tomas is also having to get used to Flicker being away, now that his dragon's home is back in the frosty North. Adventure is never far away for Tomas, though - as he finds out when another dragon hatches on the dragonfruit tree at the bottom of the garden, a dragon who quite quickly decides he is sticking firmly with Tomas! Zing is a tiny dragon with oversized wings, who causes havoc wherever he goes. When a new girl, Aura, starts at school, proclaiming herself to be a dragon expert, Tomas is thrown into confusion. He is the one with the dragons and the dragonfruit tree, after all! Before he knows it, Tomas has blurted out his secret to Aura, and sets in motion a chain of events which will lead to adventures and mayhem aplenty ...

A warm-hearted and really fun story * Parents In Touch *
Imaginative and charming, The Boy Who Grew Dragons is a wonderfully whimsical story that kept me smiling the whole way through * Books for Topics *
Free readers will get stuck into the new series The Boy Who Grew Dragons by Andy Shepherd, about finding magic in the most ordinary of places * Angels and Urchins *
an inspired concept, this is a funny and heartwarming tale of magic, family and friendship * Madge Reviews *
This is a sumptuous start to a new series, bursting with energy and humour, yet tinged with the darker side of life too. There's a grumpy neighbour, aware but preoccupied parents, an eclectic group of friends, a strange gardening guide, nomenclature of dragon pets - so many facets all covered and explored. A perfect example of domesticity interrupted with a touch of magic. Dragon fruit will never look the same again! * Minerva Reads *
Andy Shepherd's dragon-debut is an absolute delight and is just the very start to a series that I'm sure is going to be a roaring success. It's a series that - pardon the pun - I just want to drag-on and on and on! * The Reader Teacher *
A hilarious rip-roaring adventure. Perfect for fans of Roald Dahl and Cressida Cowell * South Wales Evening Post *
A warm-hearted debut... lovely, expressive, characterful * Sunday Times *
The Boy Who Grew Dragons is one of those magical children's books that warms the cockles of your heart no matter what age you might be. It's fast, it's funny, it makes you feel good, and for the brief time, it takes to read its reassuring innocence comforts you into believing that everything is right with the world. This is Andy Shepherd's first book and she knocks it out of the park from page one * Starburst Magazine *
a spectacular start to a new series * The Sun *
[An] ingenious premise is brought to life with great skill and humour * The Scotsman *
Shepherd delights in describing crazy situations, and the book's heartfelt message is one of care and friendship * Literary Review *
Fantastic fire-breathing fun with wonderful illustrations by Sara Ogilvie, this is a lovely new series for anyone who ever wanted a pet dragon * WRD Magazine *
A kind of Pete's Dragon with extra giggles, The Boy Who Grew Dragons takes on the rather hair-singeing challenges of finding that your grandad's garden has suddenly started sprouting fire-breathing mischief-makers and the illustrations by Sara Ogilvie really make it come alive * Waterstones Blog *
charming [and] sublime * Event Magazine *
Hilarious, warm and full of magic... featuring delightful line drawings * The Metro *
My son and I really liked this. It's at heart a simple story, but has some rather charming elements. Tomas raises his baby dragon, keeping him a secret, though his little sister finds out and her precious little ways are rather adorable.Friends of course eventually become suspicious - especially when there's explosive dragon poo to be found in Tomas's school bag! One of our favourite scenes, I think. The scenes of baby Flicker causing mayhem are very much in line with the age group's humour * Nudge Book *
Irresistible... everything you want in a book for a newly independent reader - tender realism, honouring children's inner feelings and anarchic magic, both beautiful and regrettable. Sara Ogilvie's illustrations capture both enchantment and stench... A modern classic * The Guardian *
A proper children's book... the humour and Sara Ogilvie's illustrations are just right * New Statesman *
The story is a heartwarming account of one boy's struggle to look after a mythical creature whilst juggling the reality of life at school and at home with lots of laugh-out-loud funny moments and peppered with bold illusstrations that will keep young readers enthralled * The School Librarian *
A wonderfully whimsical story that's fast, funny and full of feel-good moments * Creative Bloq *
Funny and Imaginative * The Week Junior *

Andy Shepherd (Author) Andy Shepherd is a children's writer working on middle-grade fiction and picture books. She lives near Cambridge with her husband, two sons and their border collie. She spends her spare time trying to figure out how to move this beautiful city closer to the sea. Sara Ogilvie (Illustrator) Sara Ogilvie is an award-winning illustrator. She was born in Edinburgh in 1971 and now lives in Newcastle upon Tyne. Sara's many picture books include THE DETECTIVE DOG by Julia Donaldson, THE WORST PRINCESS by Anna Kemp, and IZZY GIZMO by Pip Jones. Her middle grade fiction includes Phil Earle's DEMOLITION DAD (and others in the Storey Street series). www.saraogilvie.com