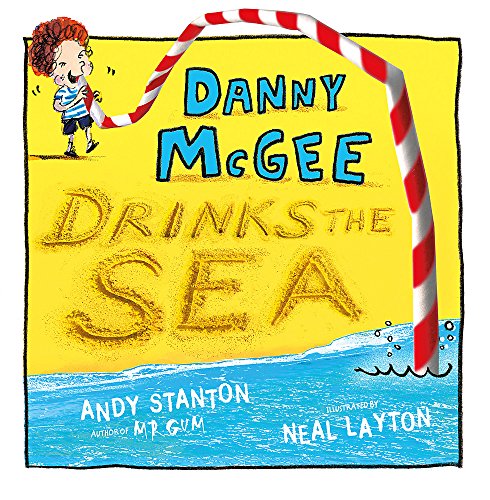 In Stock
£7.49
Meet the boy who drinks the sea - yes, really! - in this absurdly funny picture book from bestselling Andy Stanton, author of Mr Gum, and Neal Layton.
Good
Only 1 left

A hilariously anarchic tale from the inimitable Andy Stanton, author of Mr Gum, and much loved illustrator Neal Layton.

Can a boy drink the sea? Surely it's impossible! But Danny McGee does just that - and now he has his sights on other things. Soon he's swallowing trees, flies, fleas, peas, mountains ... where will it end?!

Andy Stanton has won a string of awards for his Mr Gum books, including the Red House Children's Book Award, the Roald Dahl Funny Prize, and the Blue Peter Book Award for Best Book With Pictures.

Neal Layton is the multi-award-winning illustrator of the Emily Brown books.

Prepare yourself for fits of giggles from adults and children as you read this hilarious picture book. [...] Wonderfully funny and superbly illustrated * Parents In Touch *
We loved this rhyming slice of brilliant silliness and surreality. Andy (Mr Gum) Stanton and Neal Layton have teamed up to fabulous effect, creating a future read-aloud classic. -- Phil May * Read it Daddy *
This is a picture book to delight readers young - and old, and deserves to become a staple of storytime, whether in the classroom or at bedtime. * Books for Keeps *
Unstoppable anarchic fun in Danny McGee Drinks the Sea (Hodder), from Andy "Mr Gum" Stanton, and boasting Neal Layton's splendid wild-haired illustrations....Full of playful, boomeranging, sometimes unnerving rhymes and a brilliantly disconcerting twist * Theguardian.com *
...combining comic cartoon and photo-collage, is an unforgettable nonsense tale that will be requested over and over. * Red Reading Hub *
Andy stanton, with brilliant illustrator Neal Layton, has created a humorous rhyming tale that's ... great fun ... full of Stanton's surreal silliness * Ham & High *
This is a classic pairing of author and illustrator and one of the funniest picture book ever written and drawn * Book Trust *
This is a great story for shared reading as the rhythm of the dialogue carries the reader through each fantastic meal to the conclusion of the dare * School Librarian *

Andy Stanton has written eight books about Mr Gum, along with further successful fiction and picture book titles. He was overall winner of the Red House Children's Book Award in 2007 for You're a Bad Man, Mr Gum! and in 2008 won the inaugural Roald Dahl Funny Prize for Mr Gum and the Dancing Bear. He has twice won the Blue Peter Book Award for Best Book With Pictures, and been shortlisted for a host of other awards.

Neal Layton has illustrated more than 40 books, working with award-winning authors such as Cressida Cowell, Michael Rosen and Roger McGough. He has won the Smarties Book Prize twice, for Bartholomew and the Bug, and Oscar and Arabella, both of which he wrote and illustrated, and won the same award for That Rabbit Belongs to Emily Brown, written by Cressida Cowell. He has won numerous other awards both in the UK and overseas, and been shortlisted for many more, including the Red House and Blue Peter book awards and the Booktrust Early Years Award. He lives with his family in Portsmouth.

GOR009936480
Danny McGee Drinks the Sea by Andy Stanton
Andy Stanton
Used - Good
Hardback
Hachette Children's Group
2016-11-03
32
1444928767
9781444928761
N/A
Book picture is for illustrative purposes only, actual binding, cover or edition may vary.
This is a used book - there is no escaping the fact it has been read by someone else and it will show signs of wear and previous use. Overall we expect it to be in very good condition, but if you are not entirely satisfied please get in touch with us.