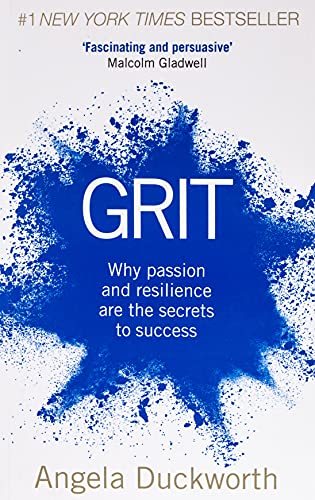 In this must-read for anyone seeking to succeed, pioneering psychologist Angela Duckworth takes us on an eye-opening journey to discover the true qualities that lead to outstanding achievement.

Grit: Why passion and resilience are the secrets to success by Angela Duckworth

In this must-read for anyone seeking to succeed, pioneering psychologist Angela Duckworth takes us on an eye-opening journey to discover the true qualities that lead to outstanding achievement. Winningly personal, insightful and powerful, Grit is a book about what goes through your head when you fall down, and how that - not talent or luck - makes all the difference.

GRIT is a persuasive and fascinating response to the cult of IQ fundamentalism. Duckworth reminds us that it is character and perseverance that set the successful apart. * Malcolm Gladwell *
Impressively fresh and original ... GRIT scrubs away preconceptions about how far our potential can take us. And it solves the riddle of how those not likely to succeed in fact do. Buy this, send copies to your friends, and tell the world that there is, in fact, hope. We can all dazzle. * Susan Cain, New York Times bestselling author *

At a time when our collective notion of success has shrunk to the point of being unrecognizable, Angela Duckworth arrives to restore it. With a mix of masterful storytelling and the latest science, she shows that perseverance and passion matter at least as much as talent and intelligence. And far from simply urging us to work harder for the sake of working harder, Grit offers a truly sane perspective: that true success comes when we devote ourselves to endeavors that give us joy and purpose.

* Arianna Huffington, bestselling author of Thrive *
This book will change your life. Fascinating, rigorous, and practical, Grit is destined to be a classic in the literature of success. * Dan Heath, bestselling co-author of Made to Stick, Switch and Decisive *

Angela Duckworth has written a contemporary classic - a clarifying and deeply-researched book in the tradition of Stephen Covey and Carol Dweck. For anyone hoping to work smarter or live better, GRIT is an essential - and perhaps life-changing - read.

* Daniel H. Pink, author of Drive and To Sell is Human *

Dr Angela Duckworth is a 2013 MacArthur Fellow and an associate professor of psychology at the University of Pennsylvania. She is an expert in non-IQ competencies, including grit and self-control. A highly sought-after international speaker, her TED talk on grit has been viewed by over 10 million people.

Duckworth's hypothesis that the real guarantor of success may not be inborn talent but a special blend of resilience and single-mindedness grew out of her upbringing: as a child her scientist father lovingly bemoaned the fact his daughter was 'no genius'. Duckworth was determined to prove him wrong and spent her youth smashing through every academic barrier. As an adult she became focused on proving her theory and to find out if grit can be learned or cultivated. It was out of this that she created her own Character Lab at the University of Pennsylvania.

GOR008386355
Grit: Why passion and resilience are the secrets to success by Angela Duckworth
Angela Duckworth
Used - Very Good
Paperback
Ebury Publishing
2017-05-01
464
1785040200
9781785040207
N/A
Book picture is for illustrative purposes only, actual binding, cover or edition may vary.
This is a used book - there is no escaping the fact it has been read by someone else and it will show signs of wear and previous use. Overall we expect it to be in very good condition, but if you are not entirely satisfied please get in touch with us.