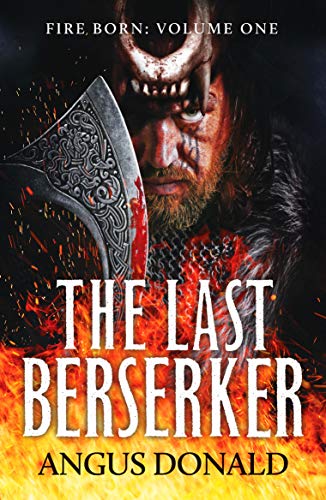 The Last Berserker by Angus Donald

The Last Berserker: An action-packed Viking adventure by Angus Donald

'Donald is a writer not only at the top of his game, but of the game' Giles Kristian, author of the Raven series
'Donald delivers a masterclass' Theodore Brun, author of A Burning Sea
'A gory, gleeful treat' The Times

The greatest warriors are forged in the flamesTwo pagan fighters

771AD, Northern Europe. Bjarki Bloodhand and Tor Hildarsdottir are journeying south into Saxony. Their destination is the Irminsul, the One Tree that links the Nine Worlds of the Middle-Realm. In this most holy place, they hope to learn how to summon their animal spirits so they can enter the ranks of the legendary berserkir: the elite frenzied fighters of the North.

Karolus, newly crowned King of the Franks, has a thorn in his side: the warlike Saxon tribes on his northern borders who shun the teachings of the Church, blasphemously continuing to worship their pagan gods.

An epic battle for the soul of the North

The West's greatest warlord vows to stamp out his neighbours' superstitions and bring the light of the True Faith to the Northmen - at the point of a sword. It will fall to Bjarki, Tor and the men and women of Saxony to resist him in a struggle for the fate of all Europe.

Praise for The Last Berserker

'Donald has taken the legendary berserkers, those frothing-at-the-mouth shield-biters, and made them human, which once again proves that Donald is a writer not only at the top of his game, but of the game ... It is a wonderful, rich and violent brew. I welcome Angus Donald to the shield wall of Viking fiction like a thirsty man welcomes a mead-brother to the feast ... A tale worthy of the skalds' Giles Kristian, author of the Raven series

'With The Last Berserker, Donald has given us the first cut of some serious Dark Age beef. By turns heart-racing, intriguing, and touching, this is not a book for the faint-hearted - I can't wait for more' Theodore Brun, author of A Burning Sea

'The Last Berserker strikes with the thundering power of Thor's hammer... rich with the earthy depth, historical detail, intrigue, violence and adventure that we expect from Donald. But it is Bjarki and Tor that make The Last Berserker stand out... Donald's masterful creations will live on in the imagination long after the final page' Matthew Harffy, author of the Bernicia Chronicles

'A wonderful, blood-soaked tale of redemption and revenge, set amidst the eighth century clash of civilisations between Pagan Vikings and Christian Franks, by a master of the genre' Saul David, author of Zulu Hart

'Loved this tale of a berserker facing up against the tidal wave of Charlemagne's expansion. Great characters, brilliantly paced and explosive, gritty battle-scenes. Highly recommended' John Gwynne, author of Malice

'Well researched detail and stunning battle scenes make The Last Berserker a white knuckle ride. A thrilling, up-all-night read' C. R. May, author of The Day of the Wolf

'I loved it. Bjarki and Tor are great characters, instantly relatable. The depth of the immersion in their world and their values gives the book authenticity and weight' Cecelia Holland, author of The Soul Thief
Angus Donald is the author of the bestselling Outlaw Chronicles, a series featuring a gangster-ish Robin Hood. Angus has also published the Holcroft Blood trilogy. He now writes full time from a medieval farmhouse in Kent.
GOR011244492
9781800321878
1800321872
The Last Berserker: An action-packed Viking adventure by Angus Donald
Angus Donald
Fire Born
Used - Very Good
Paperback
Canelo
2021-02-25
400
N/A
Book picture is for illustrative purposes only, actual binding, cover or edition may vary.
This is a used book - there is no escaping the fact it has been read by someone else and it will show signs of wear and previous use. Overall we expect it to be in very good condition, but if you are not entirely satisfied please get in touch with us
Trustpilot