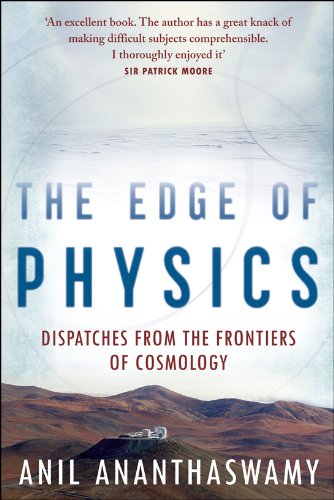 The Edge of Physics
by Anil Ananthaswamy

In Stock
£9.99
Why is the universe expanding at an even faster rate? What is the nature of the 'dark matter' that makes up almost a quarter of the universe? The author sets out in search of the world's most audacious physics experiments: the telescopes and detectors that promise to shed new light on dark matter, dark energy and quantum gravity.
Very Good Well Read
Only 1 left

The Edge of Physics Summary

The Edge of Physics: A Journey to Earth's Extremes to Unlock the Secrets of the Universe by Anil Ananthaswamy

Why is the universe expanding at an even faster rate? What is the nature of the 'dark matter' that makes up almost a quarter of the universe? Why does the universe appear fine tuned for life? And are there other universes besides our own? In this timely and original book, science writer Anil Ananthaswamy sets out in search of the world's most audacious physics experiments: the telescopes and detectors that promise to shed new light on dark matter, dark energy and quantum gravity - and answer some of the most profound questions that confront humanity. He soon finds himself at the ends of the earth, reporting back from some of the world's most inhospitable and dramatic research sites. Take the Atacama Desert in the Chilean Andes, one of the coldest places on the planet, where not even a blade of grass can survive. Its spectacularly clear skies and dry atmosphere allow astronomers to gather brilliant images of galaxies billions of light-years away, using the European Southern Observatory's Very Large Telescope on Mount Paranal, where four massive domes open up to the sky each night 'like dragons waking up'. He also takes us deep inside an abandoned iron mine in Minnesota, where half-mile-thick rock shields physicists as they hunt for the most elusive dark matter particles. And to the East Antarctic Ice Sheet, where engineers are drilling 1.5 miles into the clearest ice on the planet to build the world's largest neutrino detector, which could finally help reconcile quantum physics with Einstein's theory of general relativity. Weaving together stories about the people and places at the heart of this research, while beautifully explaining the problems that scientists are trying to solve, Ananthaswamy provides a unique portrait of the universe and our quest to understand it. An atmospheric, engaging and illuminating read, 'The Edge of Physics' depicts science as a human process and brings cosmology with all its rarefied concepts back down to earth.

The Edge of Physics Reviews

A travelogue that celebrates the blood, sweat and tears that drive our understanding of the universe * Guardian *
An excellent book. The author has a great knack of making difficult subjects comprehensible. I thoroughly enjoyed it -- Sir Patrick Moore
A remarkable narrative that combines fundamental physics with high adventure * New Scientist *
Ananthaswamy displays a writer's touch for the fascinating detail... whether he is in an abandoned iron mine in Minnesota's Mesabi Range or the frigid Siberian expanse of Lake Baikal, he finds intrepid physicists and explains to us why these weird places are the only locations on the planet where these experiments could be done * Washington Post *
... quite simply, the ultimate physics-adventure travelogue... as an adventure story and a fly-on-the-wall account of remote places that most of us will never visit, 'The Edge of Physics' is brilliant * PhysicsWorld *
A grand tour of modern day cosmology's sacred places... evocative... engaging... refreshing... a taste of science in the heroic mode * Sky At Night magazine *
Smoothly weaves together the stories of people who help push science forward, from principal investigators to research institute gardeners, with exquisitely clear explanations of the questions they hope to solve - and why some research can be done only at the edge of the world * ScienceNews *
Ananthaswamy's investigation of current experiments in physics bypasses the mathematics of the field, making it easier for the average reader to dig in and enjoy the amazing discoveries and research methods that he encounters. The author has a knack for intertwining an overview of the purpose of these experiments with a finely balanced dose of related history and trivia. He also exhibits poetic touches here and there as he shares colorful vignettes from each of his destinations * Curled Up With A Good Book.com *
While Ananthaswamy... focuses heavily on the science, 'The Edge of Physics' reads like a travel-adventure story or a work of fiction * Failure Magazine *
From the top of Hawaii's Mauna Kea to Switzerland's Large Hadron Collider and more, Ananthaswamy paints a vivid picture of scientific investigations in harsh working conditions... even for readers who don't know a neutrino from Adam, these interesting tales of human endeavor make 'The Edge of Physics' a trip worth taking * The BookPage *
Clean, elegant prose, humming with interest -- Robert MacFarlane, author of 'The Wild Places'
An accomplished and timely overview of modern cosmology and particle astrophysics * Nature *
A stirring, scenic narrative... Ananthaswamy journeys to several geographically and scientifically extreme outposts, and returns not only with engaging portraits of the men and women who work there, but also a vibrant glimpse of how cutting-edge research is actually performed. Part history lesson, part travelogue, part adventure story, 'The Edge of Physics' is a wonder-steeped page-turner * Seed Magazine *
Physicists are trying to understand the furthest reaches of space and the furthest extremes of matter and energy. To do it, they have to trek to some of the furthest places on Earth from deep underground, to forbidding mountains, to the cold of Antarctica. Anil Anathaswamy takes us on a thrilling ride around the globe and around the cosmos, to reveal the real work that goes into understanding our universe -- Sean Carroll, Caltech physicist, author of 'From Eternity to Here'
Ananthaswamy's juxtaposition of extreme travel and extreme science offers a genuinely novel route into the story of modern cosmology... A well written and genuinely accessible tale of what it takes to push past the edge of human knowledge -- Thomas Levenson, author of 'Newton and the Counterfeiter'

Anil Ananthaswamy is a consulting editor for 'New Scientist' in London. He is also a contributor to 'National Geographic News'. He has a Master of Science degree from the University of Washington, Seattle and worked as a software engineer in Silicon Valley before training as a journalist at the University of California, Santa Cruz. He lives in London.

GOR004690747
The Edge of Physics: A Journey to Earth's Extremes to Unlock the Secrets of the Universe by Anil Ananthaswamy
Anil Ananthaswamy
Used - Very Good
Hardback
Prelude
2010-04-22
336
0715637045
9780715637043
N/A
Book picture is for illustrative purposes only, actual binding, cover or edition may vary.
This is a used book - there is no escaping the fact it has been read by someone else and it will show signs of wear and previous use. Overall we expect it to be in very good condition, but if you are not entirely satisfied please get in touch with us.