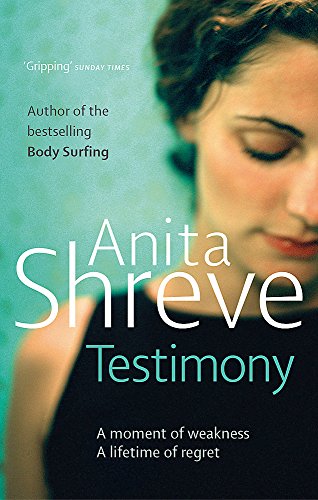 At a New England boarding school, a sex scandal is about to break. Even more shocking than the sexual acts themselves is the fact that they were caught on videotape. A Pandora's box of revelations, the tape triggers a chorus of voice -- those of the men, women, teenagers, and parents involved in the scandal -- that details the ways in which lives can be derailed or destroyed in one foolish moment.

A gripping emotional drama with the pace of a thriller, Anita Shreve's Testimony explores the dark impulses that sway the lives of seeming innocents, and the ways in which our best intentions can lead to our worst transgressions.

** 'Anita Shreve is back on cracking form with TESTIMONY. What is so fresh and resonant about this novel is the clever way in which the author unpacks the events with a series of separate narratives. Each voice contributes an additional layer of impasto to the picture; each layer, in turn, has to be mined carefully for its information and character and situation. Poised and absolutely steady-handed, this is a gripping piece of deconstruction * Elizabeth Buchan, SUNDAY TIMES *
** 'Anita Shreve's latest novel, TESTIMONY is one of her best. With her acute eye for behaviour and an exquisite ear for dialogue, Shreve explores the actions and reaction that will destroy a community through their all-too-human desire s' EXPRESS * ** 'Anita Shreve is a phenomenon. As ever - and even though the novel is written from different points of view - the power of Shreve's writing lies in it relentless passivity. The prose is undemonstrative, yet insidiously accomplished. For some, it may be *
Charlie Hill, NEW STATESMAN * ** 'A perfectly pitched account of human fallibility and the snares of temptation' *
DAILY MAIL * ** 'Her experience as a storyteller shows in the writing, which is deft, the multiples voices authentic and subtly characterized. The love between Silas and his girlfriend Noelle is untouched by the cynicism around them. The other characters are perhaps t *

Anita Shreve is the author of thirteen other critically acclaimed and bestselling novels, all published in Abacus paperback.

GOR001135341
Testimony by Anita Shreve
Anita Shreve
Used - Very Good
Paperback
Little, Brown Book Group
2009-06-04
320
0349119023
9780349119021
N/A
Book picture is for illustrative purposes only, actual binding, cover or edition may vary.
This is a used book - there is no escaping the fact it has been read by someone else and it will show signs of wear and previous use. Overall we expect it to be in very good condition, but if you are not entirely satisfied please get in touch with us.