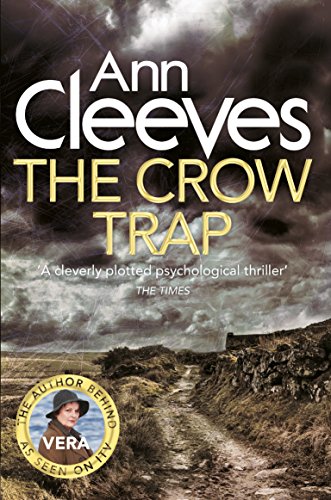 The Crow Trap
by Ann Cleeves

The Crow Trap by Ann Cleeves

Three very different women come together at isolated Baikie's Cottage on the North Pennines, to complete an environmental survey. Three women who each know the meaning of betrayal . . .

Rachael, the team leader, is still reeling after a double betrayal by her lover and boss, Peter Kemp. Anne, a botanist, sees the survey as a chance to indulge in a little deception of her own. And then there is Grace, a strange, uncommunicative young woman, hiding plenty of her own secrets.

Rachael is the first to arrive at the cottage, where she discovers the body of her friend, Bella Furness. Bella, it appears, has committed suicide - a verdict Rachael refuses to accept.

When another death occurs, a fourth woman enters the picture - the unconventional Detective Inspector Vera Stanhope . . .

Ann Cleeves is the author behind ITV's VERA and BBC One's SHETLAND. She has written over twenty-five novels, and is the creator of detectives Vera Stanhope and Jimmy Perez - characters loved both on screen and in print. Her books have now sold over 1 million copies worldwide.

Ann worked as a probation officer, bird observatory cook and auxiliary coastguard before she started writing. She is a member of `Murder Squad', working with other British northern writers to promote crime fiction. In 2006 Ann was awarded the Duncan Lawrie Dagger (CWA Gold Dagger) for Best Crime Novel, for Raven Black, the first book in her Shetland series. In 2012 she was inducted into the CWA Crime Thriller Awards Hall of Fame. Ann lives in North Tyneside.

GOR007315888
The Crow Trap by Ann Cleeves
Ann Cleeves
Vera Stanhope
Used - Very Good
Paperback
Pan Macmillan
2016-01-14
560
1509815899
9781509815890
N/A
Book picture is for illustrative purposes only, actual binding, cover or edition may vary.
This is a used book - there is no escaping the fact it has been read by someone else and it will show signs of wear and previous use. Overall we expect it to be in very good condition, but if you are not entirely satisfied please get in touch with us.