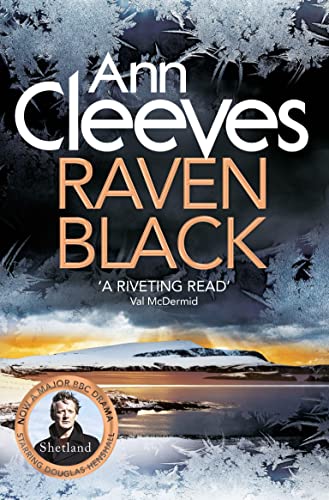 In Stock
£3.59
A remote community, touched by evil - would you know who to trust?
Very Good Good Well Read
145 in stock

It is a cold January morning and Shetland lies buried beneath a deep layer of snow. Trudging home, Fran Hunter's eye is drawn to a vivid splash of colour on the white ground, ravens circling above. It is the strangled body of her teenage neighbour Catherine Ross. As Fran opens her mouth to scream, the ravens continue their deadly dance . . .

The locals on the quiet island stubbornly focus their gaze on one man - loner and simpleton Magnus Tait. But when police insist on opening out the investigation a veil of suspicion and fear is thrown over the entire community. For the first time in years, Catherine's neighbours nervously lock their doors, whilst a killer lives on in their midst.

GOR007069310
Raven Black by Ann Cleeves
Ann Cleeves
Shetland
Used - Very Good
Paperback
Pan Macmillan
2015-07-02
400
1447274431
9781447274438
Winner of CWA Goldsboro Gold Dagger 2006 (UK)
Book picture is for illustrative purposes only, actual binding, cover or edition may vary.
This is a used book - there is no escaping the fact it has been read by someone else and it will show signs of wear and previous use. Overall we expect it to be in very good condition, but if you are not entirely satisfied please get in touch with us.