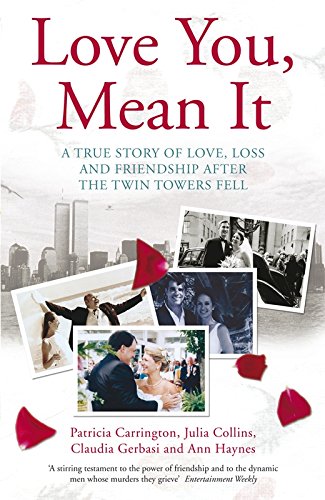 Love You, Mean it
by Ann Haynes

In Stock
£2.39
Patricia, Julia, Claudia and Ann lost their husbands who worked at the World Trade Center. In the dark days following September 11th, 2001, the four came together and found comfort in each other. This book is a shared memoir of four marriages, of how these four women rebuilt their lives after a deep loss.
Very Good
Only 1 left

Love You, Mean it Summary

Love You, Mean it by Ann Haynes

What would you do if, one glorious September morning, your husband were to die suddenly, when all he had done was go to work, and you didn't even wake up properly to say goodbye?

For Patricia, Julia, Claudia and Ann, four thirty-something women whose husbands worked at the World Trade Center, this became a tragic reality. But in the dark days following September 11th, 2001, the four came together and found comfort in each other.

Love You, Mean It is a remarkable shared memoir of four marriages, of how four hope-filled relationships were tragically cut short, of how these four women rebuilt their lives after a deep loss, but, most of all, it is an extraordinary testament to the power of friendship.

Patricia Carrington married Jeremy "Caz" Carrington in 2000. She lives in Brooklyn with her dog, Lola.

Julia Collins married Tom Collins in 2000. She works for the National Football League as Director of Mens Apparel. Julia recently got married and lives with her current husband in Manhattan.

Claudia Gerbasi married Bart Ruggiere in 2000. She is a sales director for Cole Haan and lives with her current husband, John Donovan, in downtown Manhattan.

Ann Haynes married Ward Haynes in 1994. She recently stopped working as a financial planner in order to devote more time to her children. Ann married Kevin Nalepka and lives with him and her three children in Rye, New York.

GOR001112209
Love You, Mean it by Ann Haynes
Ann Haynes
Used - Very Good
Paperback
Penguin Books Ltd
2007-09-06
336
0141030127
9780141030128
N/A
Book picture is for illustrative purposes only, actual binding, cover or edition may vary.
This is a used book - there is no escaping the fact it has been read by someone else and it will show signs of wear and previous use. Overall we expect it to be in very good condition, but if you are not entirely satisfied please get in touch with us.