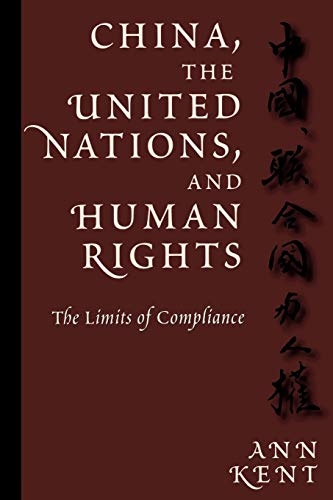 China, the United Nations, and Human Rights
by Ann Kent

In Stock
£5.49
"An ambitious and impressive undertaking that makes a significant contribution to the understanding of how international regimes function and how China interacts with the international order."--R. Randle Edwards, Columbia University
Good
Only 1 left

China, the United Nations, and Human Rights: The Limits of Compliance by Ann Kent

Selected by Choice magazine as a Outstanding Academic Book for 2000

Nelson Mandela once said, "Human rights have become the focal point of international relations." This has certainly become true in American relations with the People's Republic of China. Ann Kent's book documents China's compliance with the norms and rules of international treaties, and serves as a case study of the effectiveness of the international human rights regime, that network of international consensual agreements concerning acceptable treatment of individuals at the hands of nation-states.

Since the early 1980s, and particularly since 1989, by means of vigorous monitoring and the strict maintenance of standards, United Nations human rights organizations have encouraged China to move away from its insistence on the principle of noninterference, to take part in resolutions critical of human rights conditions in other nations, and to accept the applicability to itself of human rights norms and UN procedures. Even though China has continued to suppress political dissidents at home, and appears at times resolutely defiant of outside pressure to reform, Ann Kent argues that it has gradually begun to implement some international human rights standards.

"Kent combines primary and secondary research into a detailed case study that tells us important things about both China's relations with the external world and the strengths and limits of contemporary multilateral human rights institutions."-Jack Donnelly, University of Denver

"An ambitious and impressive undertaking that makes a significant contribution to the understanding of how international regimes function and how China interacts with the international order."-R. Randle Edwards, Columbia University

"Ann Kent's China, the United Nations, and Human Rights is remarkable in that it provides both an in-depth analysis of China's human rights policy and its interaction with the various United Nations organs concerned with human rights, and an assessment of the UN human rights regime's success. . . . For all these reasons, and because it is so well written and researched, Ann Kent's new book is a much-welcomed, much-needed addition to the study of human rights and China."-Global Justice

"Impressive. . . . Rarely does one encounter such fine, readable scholarship on such a timely, complex issue."-Choice

Ann Kent, Australian Research Council fellow in the Law Program at Australian National University, is the author of Between Freedom and Subsistence: China and Human Rights.

GOR010213158
China, the United Nations, and Human Rights: The Limits of Compliance by Ann Kent
Ann Kent
Pennsylvania Studies in Human Rights
Used - Good
Paperback
University of Pennsylvania Press
1999-04-30
336
0812216814
9780812216813
N/A
Book picture is for illustrative purposes only, actual binding, cover or edition may vary.
The book has been read but remains in clean condition. All pages are intact and the cover is intact. Some minor wear to the spine.