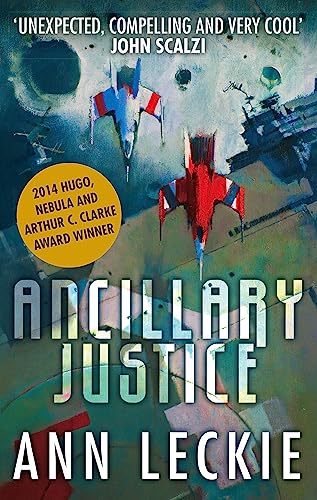 Used Price
£4.49
New RRP £8.99
Free Shipping in the UK
The record-breaking debut novel that won every major science fiction award, Ancillary Justice is the story of a warship trapped in a human body and her search for revenge.
Very Good Good Well Read


The record-breaking debut novel that won every major science fiction award in 2014, Ancillary Justice is the story of a warship trapped in a human body and her search for revenge.
Ann Leckie is the first author to win the Arthur C. Clarke, the Nebula and the Hugo Award for Best Novel in the same year.

They made me kill thousands, but I only have one target now.

The Radch are conquerors to be feared - resist and they'll turn you into a 'corpse soldier' - one of an army of dead prisoners animated by a warship's AI mind. Whole planets are conquered by their own people.
The colossal warship called The Justice of Toren has been destroyed - but one ship-possessed soldier has escaped the devastation. Used to controlling thousands of hands, thousands of mouths, The Justice now has only two hands, and one mouth with which to tell her tale.
But one fragile, human body might just be enough to take revenge against those who destroyed her.

'ESTABLISHES LECKIE AS AN HEIR TO BANKS'
Elizabeth Bear

Thrilling, moving and awe-inspiring * Guardian *
Signals the arrival of a hard science fiction author who just might fill the gap left by Iain M. Banks. Ancillary Justice is a highly original novel . . . an intelligent slow-burner. Highly recommended * Independent on Sunday *
You will be truly astounded at how Leckie has fully fleshed out a universe and is asking and attempting to answer the difficult questions that many authors never even address in science fiction * Buzzfeed *
Unexpected, compelling and very cool - Ann Leckie nails it. I've never met a heroine like Breq before. I consider this a very good thing indeed -- John Scalzi (Hugo Award-winning author of REDSHIRTS)
Total gamechanger. Get it, read it, wish to hell you'd written it. Ann Leckie's Ancillary Justice may well be the most important book Orbit have published in ages -- Paul Graham Raven
Establishes Leckie as an heir to Banks and Cherryh -- Elizabeth Bear
It's not every day a debut novel by an author you'd never heard of before derails your entire afternoon with its brilliance -- Liz Bourke * Tor.com *
Using the format of a SF military adventure blended with hints of space opera, Leckie explores the expanded meaning of human nature and the uneasy balance between individuality and membership in a group identity. Leckie is a newcomer to watch * Library Journal (starred review) *
Leckie's novel cast of characters serves her well-plotted story nicely. This is an altogether promising debut * Kirkus *
Our #1 pick for the year's best science fiction or fantasy book . . . this Iain M. Banks-esque tale was the book that made us most excited about the future of science fiction in 2013 * io9.com *
It engages, it excites, and it challenges the way the reader views our world. Leckie may be a former Secretary of the Science Fiction Writers of America, but she's the President of this year's crop of debut novelists. Ancillary Justice might be the best science fiction novel of this very young decade -- Justin Landon * Staffer's Book Review *
The sort of book that the Clarke Award wishes it had last year ... be prepared to see Ancillary Justice bandied around a lot come awards season. (As it should be) -- Jared Shurin * Pornokitsch *
Leckie uses familiar set pieces-an expansionist galaxy-spanning empire, a protagonist on a single-minded quest for justice-to transcend space-opera conventions in innovative ways. This impressive debut succeeds in making Breq a protagonist readers will invest in, and establishes Leckie as a talent to watch closely * Publisher's Weekly *
Leckie's debut gives casual and hardcore sci-fi fans alike a wonderful read * RT Book Reviews *
First rate, rollicking space-opera with plenty of action, intrigue and adventure ... a fabulous debut * The Skiffy and Fanty Show *
A sharply written space opera . . . tackling ideas about politics and gender in a way that's both engaging and provacative . . . a gripping read that's well worth a look -- Saxon Bullock * SFX Magazine *

The record-breaking winner of the Hugo, Nebula, Arthur C. Clarke and British Science Fiction Association Awards for her debut novel, Ann Leckie lives in St Louis, Missouri, with her husband, children and cats. You can find her website at www.annleckie.com or chat to her on Twitter at @Ann_Leckie.