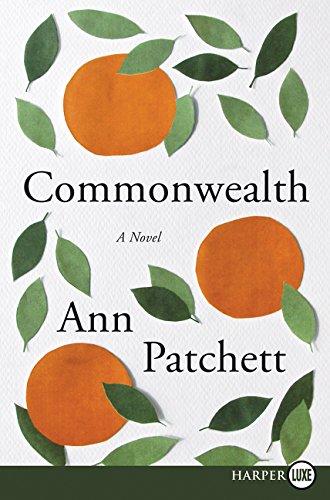 One Sunday afternoon in Southern California, Bert Cousins shows up at Franny Keating's christening party uninvited. Before evening falls, he has kissed Franny's mother, Beverly--thus setting in motion the dissolution of their marriages and the joining of two families.

When, in her twenties, Franny begins an affair with the legendary author Leon Posen and tells him about her family, the story of her siblings is no longer hers to control. Their childhood becomes the basis for his wildly successful book, ultimately forcing them to come to terms with their losses, their guilt, and the deeply loyal connection they feel for one another. Told with equal measures of humor and heartbreak, Commonwealth is a meditation on inspiration, interpretation, and the ownership of stories from an award-winning, bestselling author.

Praise for Commonwealth:
"Patchett brings humanity, humor, and a disarming affection to lovable, struggling characters... Irresistible."--Library Journal
Praise for State of Wonder:
"An engaging, consummately told tale."--New York Times
"...a funny, sad, and ultimately heart-wrenching family portrait...Patchett elegantly manages a varied cast of characters...[Patchett is] at her peak in humor, humanity, and understanding people in challenging situations."--Publishers Weekly (starred review)
"...to create a story with 10 protagonists that spans 50 years - and at least five settings spread across the globe - is a balancing act that requires immense narrative skill, and Patchett never falters."--Knoxville News-Sentinel
"Commonwealth bursts with keen insights into faithfulness, memory and mortality... [An] ambitious American epic..."--Atlanta Journal-Constitution
"Commonwealth is a sly book about storytelling, a story about a single incident - really two pivotal incidents - spun out over the length of a narrative constructed like a conversation but encompassing decades."--Kansas City Star
"Commonwealth is a smart, thoughtful novel about the ties that bind us."--Pop Sugar
"Commonwealth is an all-American family saga, but her touching and even-handed approach to themes such as family politics, love, the role of literature and the acidic nature of lies is buoyed by a generous sprinkling of matter-of-fact humor"--BookPage
"(A) rich and engrossing new novel ..."--New York Times Book Review
"a wry, compassionate tale"--Christian Science Monitor
"moving, beautifully crafted novel..."--Milwaukee Journal Sentinel
"splendid new novel... Just try to stop reading. And you won't want to. Patchett is in stellar form."--USA Today
"[A] memorable, modern novel"--Flavorwire
"Ann Patchett's gifts are more clear than ever in Commonwealth"--Dallas Morning News
"Ann Patchett's moving, beautifully crafted novel"--Spokesman Review
"Emotionally lucid. . . . Patchett is at her lyrical best when she catalogues the jungle."--The New Yorker
"I couldn't put down Ann Patchett's terrific new novel..."--Woman's Day
"Indeed, this is Patchett's most autobiographical novel, a sharply funny, chilling, entrancing, and profoundly affecting look into one family's "commonwealth," its shared affinities, conflicts, loss, and love."--Booklist
"Patchett brings every character in Commonwealth to luminous life."--The Entertainment Report
"Patchett gives us funny, flawed characters, and the rich reward of Commonwealth is seeing their lives unfold..."--Houston Chronicle
"Patchett's insight into the practical and emotional impacts of uprooting families is impressive... candid, poignant, humorous..."--Roanoke Times
"Patchett's slyly knowing voice - full of wit and warmth - elevates every page of this novel - one that, through the alchemy of her writing, somehow feels more than the sum of its parts."--Newsday
"Patchett's storytelling here feels warmer and richer and more resonant than anything she's done before."--Entertainment Weekly
"Reading Commonwealth is a transporting experience... It feels like Patchett's most intimate novel and is without doubt one of her best."--Los Angeles Times
"Spinning ordinary lives into literary gold"--Seattle Times
"Surprising, nuanced, complex and, above all, genuine."--Asheville Citizen-Times
"The prose is lean and inviting...A satisfying meat-and-potatoes domestic novel from one of our finest writers."--Kirkus Reviews (starred review)
"Wonderful... Patchett is a master storyteller"--O, the Oprah Magazine
"Wonderfully executed..."--Marie Claire
"... the emotional intelligence of Patchett's storytelling here feels warmer and richer and more resonant than anything she's done before." Rating: A--Entertainment Weekly
"Commonwealth represents yet another victory for Patchett. Readers will fly through it... the tale is so rich and the plot is so wildly addicting, readers won't be able to put it down until they've turned the final page."--Hampton Sheet
"close obervation, deadpan humor... Chekhov regularly invoked"--Wall Street Journal
"Exquisite... Commonwealth is impossible to put down."--New York Times
"Extraordinary. . . . Is there nothing the prodigiously talented Ann Patchett can't do?"--Boston Globe
"Patchett's storytelling has never seemed more effortlessly graceful. This is minimalism that magically speaks volumes..."--Washington Post
"The genius of the way Patchett approached Commonwealth is that it's constructed like a puzzle... Maybe it's another case of the tried-and-true adage: "Write what you know." Because this book? It's pure gangbusters."--San Francisco Chronicle
"This is surely the smartest, most exciting novel of the summer."--Washington Post
strong >ANN PATCHETT is the author of seven novels, The Patron Saint of Liars, Taft, The Magician's Assistant, Bel Canto, Run, State of Wonder, and Commonwealth. She was the editor of Best American Short Stories, 2006, and has written three books of nonfiction, Truth & Beauty, about her friendship with the writer, Lucy Grealy, What now? an expansion of her graduation address at Sarah Lawrence College, and, most recently, This is the Story of a Happy Marriage, a collection of essays.
GOR010251611
9780062566874
0062566873
Commonwealth by Ann Patchett
Ann Patchett
Used - Very Good
Paperback
Newbury House Publishers,U.S.
2016-10-15
464
N/A
Book picture is for illustrative purposes only, actual binding, cover or edition may vary.
This is a used book - there is no escaping the fact it has been read by someone else and it will show signs of wear and previous use. Overall we expect it to be in very good condition, but if you are not entirely satisfied please get in touch with us
Trustpilot