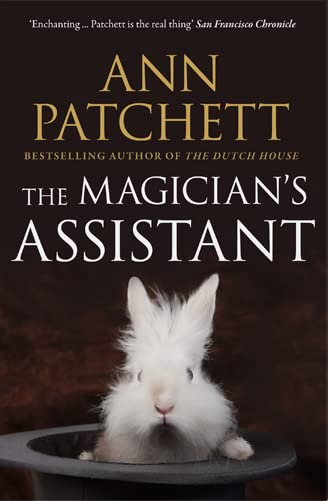 The Magician's Assistant by Ann Patchett

Shortlisted for The Women's Prize for Fiction.

From the bestselling author of The Dutch House, Commonwealth and Bel Canto, Winner of The Women's Prize for Fiction and the Pen/Faulkner Award.

The Magician's Assistant by Ann Patchett

Shortlisted for The Women's Prize for Fiction.

From the bestselling author of The Dutch House, Commonwealth and Bel Canto, Winner of The Women's Prize for Fiction and the Pen/Faulkner Award.

A magician (with one memorable appearance on the Johnny Carson Show to his credit) takes the name Parsifal. He is gay. He has a Vietnamese lover, Phan. When Phan dies of AIDS, Parsifal marries the woman who has always adored him and who has lived with them both, his assistant Sabine.

Then Parsifal himself dies in California, suddenly and shockingly, of an aneurysm. Parsifal always said that he had no living family and that he came from wealthy upscale Connecticut stock. The reality is very different, as Sabine learns from his lawyer. He came from a poor Nebraska family and they are very much alive. Indeed his mother and sister are on their way to California to meet Sabine, the daughter- and sister-in-law they know nothing about. It is bad that her husband has died. What Sabine must now cope with is coming to terms with his horrific past and the reason he divorced himself from his family and roots.

'Original, sparkling, funny and sad - a book you read in one gulp and want to revisit immediately' Penelope Lively, Daily Telegraph

'A delicate exploration of impossible love and new-found friendship' Guardian

'The kindliness of The Magician's Assistant is beguiling, and Patchett is an adroit, graceful writer' Suzanne Berne, New York Times Book Review

Ann Patchett is originally from Los Angeles and is a graduate of Sarah Lawrence College. She is the author of two earlier novels, The Patron Saint of Liars and Taft. She lives in Nashville and is the Tennessee Williams Fellow in Creative Writing at the University of the South.

GOR001038679
9781857028157
1857028155
The Magician's Assistant by Ann Patchett
Ann Patchett
Used - Very Good
Paperback
HarperCollins Publishers
1999-02-04
368
Short-listed for Orange Prize for Fiction 1998
Book picture is for illustrative purposes only, actual binding, cover or edition may vary.
This is a used book - there is no escaping the fact it has been read by someone else and it will show signs of wear and previous use. Overall we expect it to be in very good condition, but if you are not entirely satisfied please get in touch with us
Trustpilot