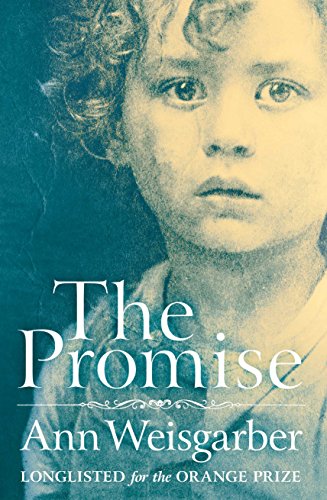 The Promise
by Ann Weisgarber

In Stock
£3.99
Shortlisted for the prestigious Walter Scott Prize for Historical Fiction; the extraordinary, devastating new novel from the author of double-Orange-Prize nominated The Personal History of Rachel DuPree
Very Good
Only 3 left

The Promise by Ann Weisgarber

Shortlisted for the prestigious Walter Scott Prize for Historical Fiction.

1900. Young pianist Catherine Wainwright flees the fashionable town of Dayton, Ohio in the wake of a terrible scandal. Heartbroken and facing destitution, she finds herself striking up correspondence with a childhood admirer, the recently widowed Oscar Williams. In desperation she agrees to marry him.

But when Catherine travels to Oscar's farm on Galveston island, Texas - a thousand miles from home - she finds she is little prepared for the life that awaits her. The island is remote, the weather sweltering, and Oscar's little boy Andre is grieving hard for his lost mother. And though Oscar tries to please his new wife, the secrets of the past sit uncomfortably between them.

Meanwhile for Nan Ogden, Oscar's housekeeper, Catherine's sudden arrival has come as a great shock. For not only did she promise Oscar's first wife that she would be the one to take care of little Andre, but she has feelings for Oscar which she is struggling to suppress. And when the worst storm in a generation descends, the women will find themselves tested as never before . . .

From the author of The Personal History of Rachel Dupree, shortlisted for the Orange Award for New Writers and longlisted for the Orange Prize, The Promise is a heart-breaking story of love, loss and buried secrets, which confirms Weisgarber as one of the most compelling literary voices writing today.

The Promise was a finalist in the Western Writers of America Best Historical Fiction Awards.

'A gripping, beautiful story of loyalties and hidden loves. Ann Weisgarber's pitch-perfect characters will break your heart and keep you guessing right to the very end' Carol Rifka Brunt, New York Times bestselling author of Tell The Wolves I'm Home 'Set against the worst natural disaster in twentieth century American history, The Promise is a riveting tale, told in lean luminous prose, of the power of love and the frailty of the human condition. Weisgarber knows storms, those that devastate the land and those that rage in the human heart. Her characters will live in your imagination long after you've turned the last deeply moving page' Ellen Feldman, author of Next to Love and Scottsboro 'This is a warm and beautiful read, but be warned -- you might need to have a box of tissues handy!' Essentials 'In September 1900, a devastating hurricane hit the island city of Galveston in Texas ... Against this dramatic backdrop, acclaimed author Ann Weisgarber has woven a beautiful and breathtaking story of love and loss, new beginnings and old secrets, resentment and reconciliation. The Promise is Weisgarber's first book since The Personal History of Rachel Dupree was nominated for the Orange Prize and it's as haunting as it is exciting. Richly descriptive and exceptionally powerful, the novel is a triumph of intelligent storytelling and understated emotion, and confirms the author as one of the most compelling contemporary literary voices around. At the exquisitely crafted heart of the story is a young woman fleeing social disgrace in sophisticated Dayton, Ohio to marry a man she hasn't seen for 12 years in the vaporising, backwoods heat of Texas ... Weisgarber's masterful evocation of time and place and her portrayal of the simmering tensions created both by the gathering storm and the subtle interplay of the central relationships are the defining elements of this absorbing novel ... The Promise is a challenging, gripping and intensely moving story' Lancashire Evening Post

Ann Weisgarber was born and raised in Kettering, Ohio. After graduating from Wright State University in Dayton, Ohio, she was a social worker in a psychiatric hospital before moving to Houston, Texas, with her husband. She earned a Master of Arts in Sociology at the University of Houston and taught high school and later, sociology at a junior college. She has lived in Boston, Massachusetts, and Des Moines, Iowa, but now splits her time between Sugar Land, Texas, and Galveston, Texas.

GOR004676083
The Promise by Ann Weisgarber
Ann Weisgarber
Used - Very Good
Hardback
Pan Macmillan
2013-02-27
320
0230745652
9780230745650
Short-listed for Walter Scott Prize for Historical Fiction 2014 (UK)
Book picture is for illustrative purposes only, actual binding, cover or edition may vary.
This is a used book - there is no escaping the fact it has been read by someone else and it will show signs of wear and previous use. Overall we expect it to be in very good condition, but if you are not entirely satisfied please get in touch with us.