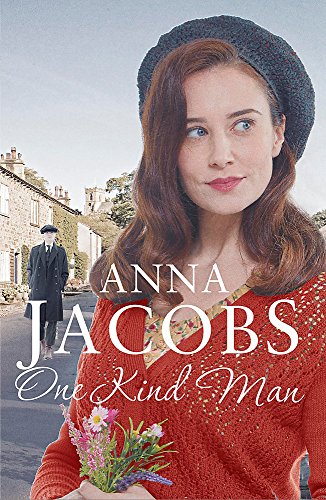 One Kind Man by Anna Jacobs

One Kind Man by Anna Jacobs

From the beloved and bestselling Anna Jacobs' comes the second novel in her new Lancashire-based saga.

1931, Lancashire:
When Finn Carlisle loses his wife and unborn child, he spends a few years travelling to keep the sad memories at bay. Just as he's ready to settle down again, his great-uncle dies and leaves everything to him. This includes Heythorpe House in Ellindale just down the road from Leah Willcox and her little fizzy drink factory.

Finn finds a village of people in dire need of jobs, a house that hasn't been cleaned or lived in for thirty years and Reggie, an eleven-year-old who's run away from the nearby orphanage and its brutal Director Buddle. When Finn sees the marks left by regular beatings, he decides Reggie will never go back there.

He can't turn away two hungry young women from the village seeking jobs as maids, either, and they too need help with their lives.

But Buddle has other plans for the child, and will stop at nothing to get Reggie back in his cruel grasp. Finn's new neighbours help him save Reggie but other surprises throw his new plans into turmoil.

'One of the most lovely and heartwarming books I have ever read! *****' - Between the Pages

Praise for the Ellindale series * :- *
One of the most lovely and heartwarming books I have ever read! ***** * Between the Pages *
A book of family, love, friendship and loyalty. ***** * Stardust Book Reviews *
I was gripped from the very first word on the very first page and I wasn't released until the last word on the last page . . . When I finished I felt like I had been through an emotional wringer. ***** * Ginger Book Geek *
Praise for Anna Jacobs * :- *
[Anna Jacobs' books have an] impressive grasp of human emotions * The Sunday Times *
Anna Jacobs' books are deservedly popular. She is one of the best writers of Lancashire sagas around * Historical Novels Review *
[Anna Jacobs is] especially big on resourceful, admirable women. Great stuff! * Daily Mail *
Anna Jacobs grew up in Lancashire and emigrated to Australia, but still visits the UK regularly to see her family and do research, something she loves. She is addicted to writing and figures she'll have to live to be 120 at least to tell all the stories that keep popping up in her imagination and nagging her to write them down. She's also addicted to her own hero, to whom she's been happily married for many years. She is the bestselling author of over eighty novels and has been shortlisted for several awards, and Pride of Lancashire won the Australian Romantic Book of the Year Award in 2006. You can find out more on her website, www.annajacobs.com or on her Facebook page, www.facebook.com/Anna.Jacobs.Books.
GOR008839706
One Kind Man by Anna Jacobs
Anna Jacobs
Ellindale Series
Used - Very Good
Hardback
Hodder & Stoughton General Division
2018-01-11
368
1473630843
9781473630840
N/A
Book picture is for illustrative purposes only, actual binding, cover or edition may vary.
This is a used book - there is no escaping the fact it has been read by someone else and it will show signs of wear and previous use. Overall we expect it to be in very good condition, but if you are not entirely satisfied please get in touch with us
Trustpilot