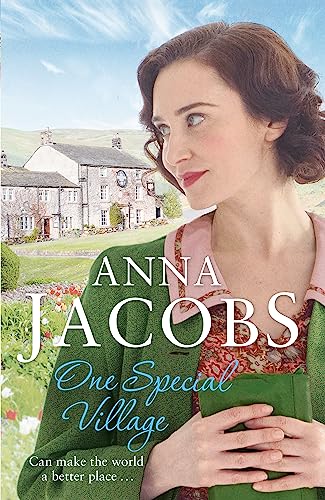 One Special Village
by Anna Jacobs

One Special Village: Book 3 in the lively, uplifting Ellindale saga by Anna Jacobs

One Special Village . . . can make the world a better place

Lancashire, 1932
Widower Harry Makepeace lives in Manchester with his sickly daughter Cathie, scrimping and saving to get by. But after she suffers a violent asthma attack, the doctors say she must move to the clean, fresh air of the countryside to have any hope of survival. When Harry chances upon a patch of land for sale in Ellindale, and an advert for a disused railway carriage that can be made into a home, he snaps both up quickly.

Harry swiftly becomes part of the community in Ellindale, making friends with the locals, and soon finds himself attracted to Nina, another newcomer to the village. Finally, he's found somewhere he and Cathie can build a new home.

But their problems are far from over. Times are hard in Ellindale - Harry is not the only one struggling to find work. Then there's his old boss, who will stop at nothing to punish him for daring to leave. And Harry's already made an enemy in Ellindale - someone who could make his life very difficult indeed . . .

'One of the most lovely and heartwarming books I have ever read! *****' - Between the Pages

Praise for the Ellindale series * :- *
One of the most lovely and heartwarming books I have ever read! ***** * Between the Pages *
A book of family, love, friendship and loyalty. ***** * Stardust Book Reviews *
I was gripped from the very first word on the very first page and I wasn't released until the last word on the last page . . . When I finished I felt like I had been through an emotional wringer. ***** * Ginger Book Geek *
Praise for Anna Jacobs * :- *
[Anna Jacobs' books have an] impressive grasp of human emotions * The Sunday Times *
Anna Jacobs' books are deservedly popular. She is one of the best writers of Lancashire sagas around * Historical Novels Review *
[Anna Jacobs is] especially big on resourceful, admirable women. Great stuff! * Daily Mail *

GOR009685437
One Special Village: Book 3 in the lively, uplifting Ellindale saga by Anna Jacobs
Anna Jacobs
Ellindale Series
Used - Very Good
Paperback
Hodder & Stoughton General Division
2019-02-07
368
1473630916
9781473630918
N/A
Book picture is for illustrative purposes only, actual binding, cover or edition may vary.
This is a used book - there is no escaping the fact it has been read by someone else and it will show signs of wear and previous use. Overall we expect it to be in very good condition, but if you are not entirely satisfied please get in touch with us.