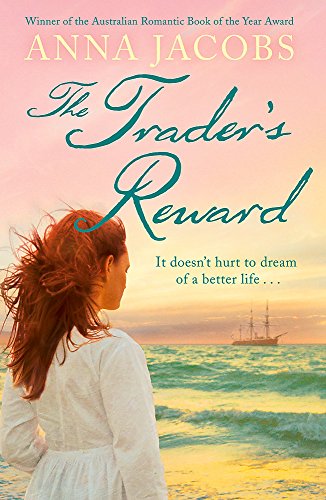 The Trader's Reward
by Anna Jacobs

The Trader's Reward by Anna Jacobs

1871. When Fergus Deagan's wife dies in childbirth, she makes him promise to take their family to Western Australia to join his brother Bram, also to marry again. She's right. His young sons and newborn daughter do need a mother's love and he needs something different.
Disowned by her father for becoming pregnant, Cara Payton bears a stillborn baby. She's in deep despair, until a plea to wetnurse a motherless baby gives her life new purpose. When Fergus proposes marriage, she accepts. She respects him and is happy to stay with the baby she now loves.
During the voyage to Australia, she and Fergus draw closer. Then her past rears its ugly head and they face a terrible crisis.
When they finally get to Fremantle, Fergus and Bram, always rivals, struggle to make friends. To make matters worse, Bram has financial problems and there is no railway where Fergus can find engineering work. Can the two brothers solve their problems? Will the newcomers find a way to build a new life?

'This story has something happening on every page...great characters and the ensemble of secondary characters flow easily with some quite complicated plots flowing well around the central story.' * Australian Romance Readers Association on THE TRADER'S SISTER *
'A compelling read' * Sun on FREEDOM'S LAND *
Impressive grasp of human emotions. * The Sunday Times *
Anna Jacobs' books are deservedly popular. She is one of the best writers of Lancashire sagas around. * Historical Novels Review *
Jacobs excels at creating vivid, memorable characters. * Booklist USA *
'A gripping storyteller.' * Sunday Star Times, Auckland, NZ *
This is a fascinating insight into a piece of Australia's history that receives little attention. * Newcastle Herald, Australia on FREEDOM'S LAND *

GOR006120058
The Trader's Reward by Anna Jacobs
Anna Jacobs
The Traders
Used - Good
Paperback
Hodder & Stoughton General Division
2014-09-11
400
1444761307
9781444761306
N/A
Book picture is for illustrative purposes only, actual binding, cover or edition may vary.
This is a used book - there is no escaping the fact it has been read by someone else and it will show signs of wear and previous use. Overall we expect it to be in very good condition, but if you are not entirely satisfied please get in touch with us.