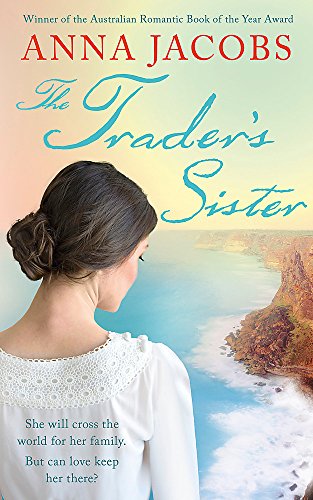 The Trader's Sister
by Anna Jacobs

The Trader's Sister by Anna Jacobs

Ismay Deagan has one wish in the world - to leave Ireland and join her brother, Bram, in Australia. However, her father has other ideas and orders her to marry their vicious neighbour Rory Flynn, even though she loathes him.

But after Rory brutally attacks her Ismay realises she has to escape. So, disguising herself as an impoverished young widow, she sets sail for Australia, hoping to be reunited with her brother.

When she meets Adam Treagar on the ship, she finally starts to believe her dreams of future happiness may come true. But before they even reach their destination they are flung into adventures in Suez, Ceylon and Singapore . . .

Can Ismay tell Adam the truth about who she really is? What secrets is Adam himself hiding? And will Ismay's past catch up with her and threaten her new life in Australia, before it has even begun?

The story keeps you turning the pages with characters who have you cheering for them or despising them. An added bonus is the opportunity to catch up with old friends in the characters from previous books. This is a must read book but only open it when you have time to read it as it's hard to put down. * Australian Romance Readers Association on THE TRADER'S SISTER *
'A compelling read' * Sun on FREEDOM'S LAND *
Impressive grasp of human emotions. * The Sunday Times *
Anna Jacobs' books are deservedly popular. She is one of the best writers of Lancashire sagas around. * Historical Novels Review *
Jacobs excels at creating vivid, memorable characters. * Booklist USA *
Vivid insight into family relationships * Coventry Evening Telegraph *
'A gripping storyteller.' * Sunday Star Times, Auckland, NZ *
This is a fascinating insight into a piece of Australia's history that receives little attention. * Newcastle Herald, Australia on FREEDOM'S LAND *

GOR011063286
The Trader's Sister by Anna Jacobs
Anna Jacobs
The Traders
Used - Like New
Paperback
Hodder & Stoughton General Division
2012-12-20
464
1444711296
9781444711295
N/A
Book picture is for illustrative purposes only, actual binding, cover or edition may vary.
The book has been read, but looks new. The book cover has no visible wear, and the dust jacket is included if applicable. No missing or damaged pages, no tears, possible very minimal creasing, no underlining or highlighting of text, and no writing in the margins.