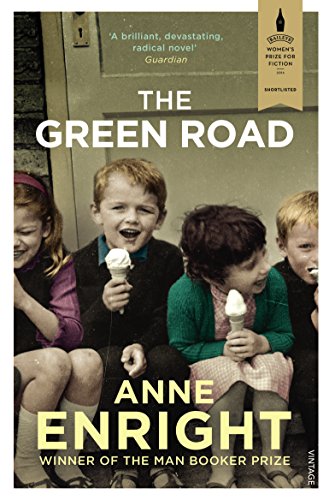 The Green Road
by Anne Enright

Used Price
£2.69
New RRP £8.99
Free Shipping in the UK
Shortlisted for the Baileys Women's Prize for Fiction 2016Shortlisted for the 2015 Costa Novel AwardLonglisted for the 2015 Man Booker PrizeWinner of the Irish Novel of the Year 2015Hanna, Dan, Constance and Emmet return to the west coast of Ireland for a final family Christmas in the home their mother is about to sell.
Very Good Good Well Read

The Green Road by Anne Enright

Shortlisted for the Baileys Women's Prize for Fiction 2016 Shortlisted for the 2015 Costa Novel Award Longlisted for the 2015 Man Booker Prize Winner of the Irish Novel of the Year 2015 Hanna, Dan, Constance and Emmet return to the west coast of Ireland for a final family Christmas in the home their mother is about to sell. As the feast turns to near painful comedy, a last, desperate act from Rosaleen - a woman who doesn't quite know how to love her children - forces them to confront the weight of family ties and the road that brought them home.

"Confirms her as one of the most significant writers of her generation.... A master. She has certainly produced a masterly work." * Sunday Times *
"The Green Road is true and rueful, as terribly adult in its clarity as its battered Madigans." -- James Wood * New Yorker *
"Enright is a shape-shifter who gets into the nerve centres of her creations; the power of her prose lies in its absence of ego. The Green Road is a devastating novel about home and how savage a place it can be." -- Frances Wilson * New Statesman *
"This novel should confirm Enright's status as one of our (their?) greatest living novelists. I hope she can be persuaded to do a sequel." -- John Sutherland * The Times *
"[A] brilliant, devastating, radical novel." -- Kate Clanchy * Guardian *

Anne Enright was born in Dublin, where she now lives and works. She has written two collections of stories, published together as Yesterday's Weather, one book of non-fiction, Making Babies, and six novels, including The Gathering, which won the 2007 Man Booker Prize, The Forgotten Waltz, which was awarded the Andrew Carnegie Medal for Excellence in Fiction, and The Green Road, which was the Bord Gais Energy Novel of the Year and won the Kerry Group Irish Fiction Award. In 2015 she was appointed as the first Laureate for Irish Fiction, and in 2018 she received the Irish PEN Award for Outstanding Contribution to Irish Literature.